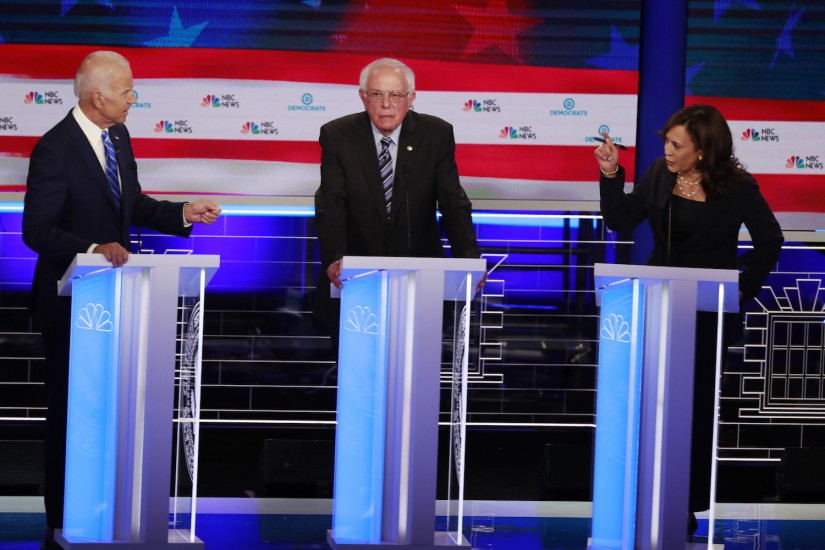 ... historically and in the present, have been largely unwilling to take concrete steps to fulfill Brown’s legal and moral mandate of equal education, so as not to alienate their local white constituencies. As such, school desegregation has long been a third-rail issue for liberal politicians.

... historically and in the present, have been largely unwilling to take concrete steps to fulfill Brown’s legal and moral mandate of equal education, so as not to alienate their local white constituencies. As such, school desegregation has long been a third-rail issue for liberal politicians.

Despite their different personal experiences with busing, Biden and Harris are emblematic of a Northern liberalism that for more than 60 years has championed the ideals of civil rights and federal intervention in the South, but resisted it when it came to desegregation at home. A phalanx of Northern white politicians and parents have used code words like “busing,” “neighborhood schools” and “local control” to thwart meaningful school desegregation in their cities in the half-century since Brown, while still claiming a moral authority over segregationists in the South.

Recognizing the way racism continues to overtly shape Northern politics and stall, even reverse, desegregation forces us both to a more sober accounting of our past and what must be done today to actually commit to and pursue desegregation and educational equality.

When the Supreme Court issued its landmark decision in Brown v. Board, black parents and civil rights activists celebrated, seeing it as a way to change their own schools. They held meetings, organized rallies and initiated school boycotts to press for desegregation across the North as well as the South. Faced with growing movements in their own cities, many Northern white parents and politicians (like their Southern counterparts) objected.

The rhetoric of “busing” became a key way white Northerners cloaked their opposition to desegregation in the post-Brown era in more palatable language that simultaneously worked to obscure the deeply separate and unequal schools that existed across the Northeast, Midwest and West. The word “busing” was used to turn necessary decisions about school assignment and transportation, which had been routine parts of school governance for decades, into something new and suspect. In reality, from L.A. to Boston to New York, students had long been bused, often to maintain segregated schools. As civil rights activist Julian Bond observed, “It’s not the bus, it’s us.” Few white parents objected to putting their kids on a bus — until the bus was used for desegregation.

When they did object, they found that they didn’t need Southern tactics to maintain segregation. It turned out you didn’t need a governor at the schoolhouse door if you had school board officials willing to adjust zoning lines to maintain segregated schools. You instructed your school administrators to call it “separation” not “segregation,” as New York Superintendent William Jansen did after Brown. You professed your commitment to civil rights and insisted you only objected to “busing.” Through this language, and the ways the media helped to make it sound innocuous, school segregation persisted across the North.

During the debates over the Civil Rights Act of 1964, for example, Northern politicians faced with growing desegregation movements at home witnessed many of their white constituents using code words like “busing” and “neighborhood schools” to protest school integration. In response, these ...