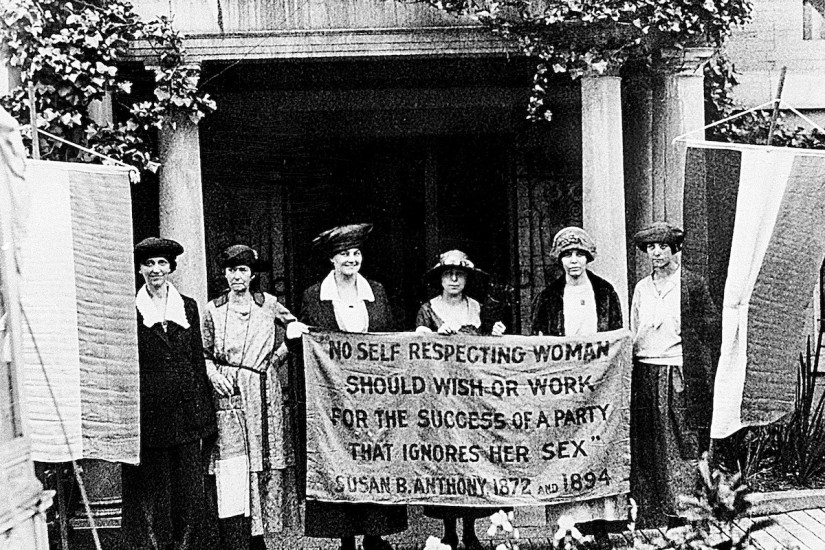 Officers of the National Woman's Party in Washington, D.C., June 1920, as they seek support for the ratification of the 19th Amendment granting women the right to vote.
AP Photo

The crime was striking a match. Never mind that the match broke before it caught, or that the fire was already burning; sixty-three-year-old Louisine Havemeyer was still hauled into court, one of thirty-nine suffragists who were arrested in front of the White House on February 10, 1919. For more than two years, hundreds of women had been protesting there six days a week. They were known as the Silent Sentinels, because they held their tongues while they held their banners. But starting that January they had taken to burning Woodrow Wilson’s speeches in tiny urns around Lafayette Park, and a few weeks into that new phase of pyrotechnics they decided to burn him, too.

Havemeyer did not actually throw the effigy of the twenty-eighth President into the fire, but she persisted in trying to light more kindling for the flames after the police told her to stop. It was her first protest of this kind. She had marched in a few parades but, as the wealthy widow of a sugar magnate, she had mostly been a benefactor, raising funds by exhibiting the extensive art collection—Rembrandt, El Greco, Manet—that she kept in her Upper East Side mansion. Her brush with the law scandalized her neighbors on Fifth Avenue, but it qualified her to go on a national railroad tour of women who had been arrested for the cause of women’s suffrage.

There were already more than enough jailbirds to fill the so-called Prison Special, not because the American suffragists were particularly radical but because so many of them had been convicted of crimes as frivolous as striking matches. Disparaged as “militants,” the women who stood vigil in front of the White House were the first people ever to stage a protest there, and dozens of them were sent to prison. Many more were heckled or spat upon by passersby, had their banners and sashes torn to pieces by mobs, and were knocked down by police.

Seventy years had passed since the Seneca Falls Convention, where hundreds of people had gathered in upstate New York to discuss the rights of women, including the right to vote. Forty years had passed since a federal amendment to the Constitution was introduced to extend the franchise to women. Suffragists had tried and failed to convince the courts that the Fourteenth and Fifteenth Amendments already did so. The rest of the country was unconvinced, too, and female suffrage remained a controversial cause in American politics. A hundred years ago, though, the Nineteenth Amendment finally passed both houses of the United States Congress, and then went to the states for ratification. On that centennial, it is worth considering not only what these women were fighting for but why they had to fight so hard, and who, exactly, was fighting against them.