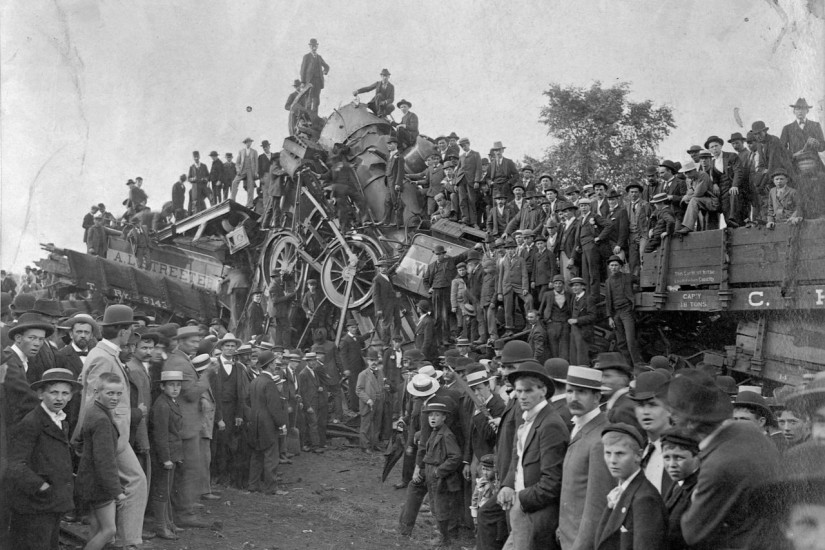 A crowd swarms over the wreckage to claim souvenirs in Buckeye Park in Ohio after a staged train wreck in 1896.
H.F. Pierson/Library of Congress

On September 15, 1896, two locomotives crashed head on 14 miles north of Waco, Texas. The locomotives’ boilers exploded on impact, sending debris flying through the air for hundreds of yards, killing at least two spectators and maiming countless others. One man even lost an eye to a flying bolt.

But no one ran from the calamity. In fact, after the crash, thousands of bystanders ran toward the destroyed locomotives hoping to claim a piece of the wreckage. That’s because the 40,000 or so people scattered along the tracks that September day knew the locomotives were going to crash and had paid to be there.

From 1896 until the 1930s, staged train wrecks were a popular—albeit destructive—event at fairs and festivals across the U.S., long before anyone ever thought of wrecking old automobiles at a demolition derby or monster truck rally.

One of the first staged train wrecks was done in 1895 by a railroad equipment salesman named A.L. Streeter in Ohio. The wreck used the same formula that nearly all other staged train wrecks would follow for the next 40 years. Organizers would lay a stretch of track, usually anywhere from 1,800 feet to a mile-long, and then get two old steam locomotives and put them at either end of the track facing each other. They would then hire two brave locomotive engineers to wait for a signal from the organizer. When they got the go-ahead, the engineers would pull the throttles back as far as they could to get the locomotives up to speed. They would then jump from the locomotive before the two trains crashed in front of a crowd who had paid a few dollars to see the spectacle.

According to the historian James J. Reisdorff’s book The Man Who Wrecked 146 Locomotives, Streeter’s wreck was so successful that there were at least six staged train collisions the following year, including the most infamous one north of Waco, Texas, known as the “Crash at Crush.”

The wreck near Waco was the brainchild of William George Crush, a passenger agent for the Missouri-Kansas-Texas Railroad, better known as the “Katy Railroad.” The Katy had been struggling to regain its financial footing following the Panic of 1893 and the appropriately named Crush was tasked with finding a way to attract new passengers to the railroad. Crush offered a deal where people could pay two dollars to ride the Katy to the wreck from anywhere in Texas.