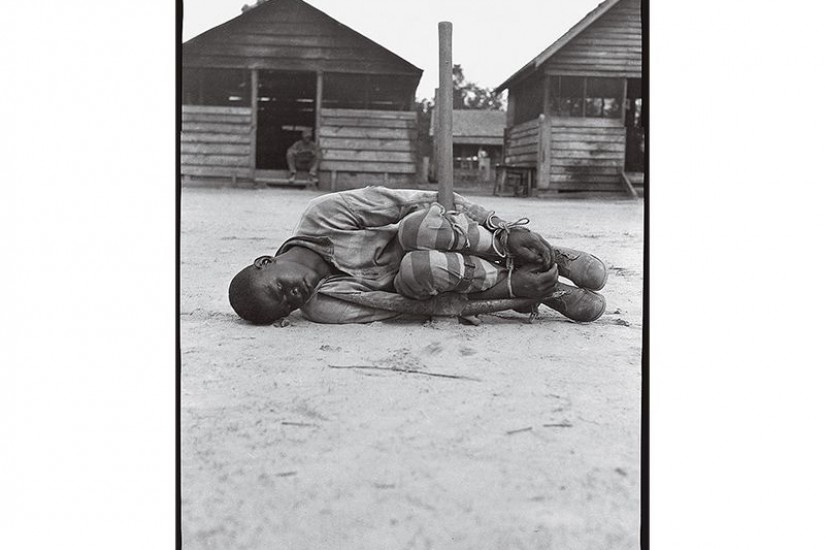 Photo from a 1932 book by investigative journalist John Spivak, of a boy in Seminole County, Georgia, who was immobilized because he "sassed" a guard.
Harry Ransom Center/University of Texas at Austin)

It’s not every day that you come across an extraordinary unknown work by one of the nation’s greatest writers. But buried in an unrelated archive I recently discovered a searing essay condemning racism in America by Langston Hughes—the moving account, published in its original form here for the first time, of an escaped prisoner he met while traveling with Zora Neale Hurston.

In the summer of 1927, Hughes lit out for the American South to learn more about the region that loomed large in his literary imagination. After giving a poetry reading at Fisk University in Nashville, Hughes journeyed by train through Louisiana and Mississippi before disembarking in Mobile, Alabama. There, to his surprise, he ran into Hurston, his friend and fellow author. Described by Yuval Taylor in his new book Zora and Langston as “one of the more fortuitous meetings in American literary history,” the encounter brought together two leading lights of the Harlem Renaissance. On the spot, the pair decided to drive back to New York City together in Hurston’s small Nash coupe.

The terrain along the back roads of the rural South was new to Hughes, who grew up in the Midwest; by contrast, Hurston’s Southern roots and training as a folklorist made her a knowledgeable guide. In his journal Hughes described the black people they met in their travels: educators, sharecropping families, blues singers and conjurers. Hughes also mentioned the chain gang prisoners forced to build the roads they traveled on.

Three years later, Hughes gave the poor, young and mostly black men of the chain gangs a voice in his satirical poem “Road Workers”—but we now know that the images of these men in gray-and-black-striped uniforms continued to linger in the mind of the writer. In this newly discovered manuscript, Hughes revisited the route he traveled with Hurston, telling the story of their encounter with one young man picked up for fighting and sentenced to hard labor on the chain gang.