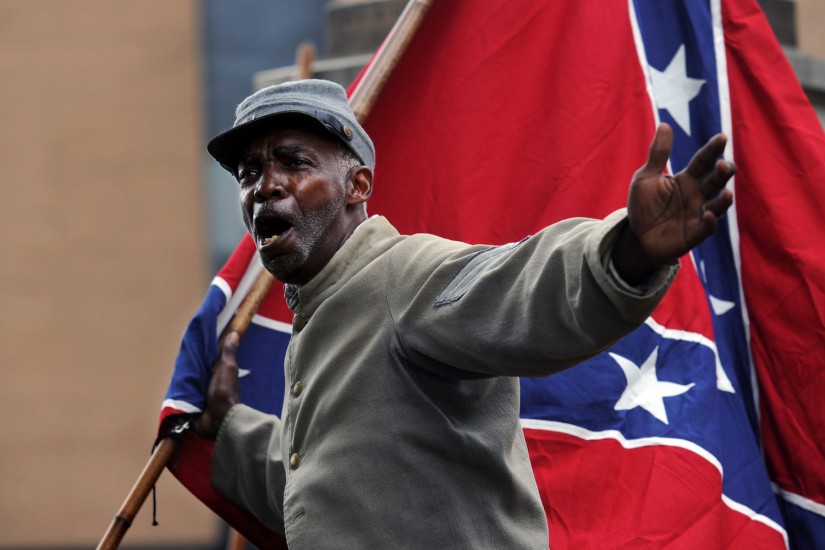 H. K. Edgerton stands in front of the Confederate Monument in Kentucky as he recites the poem "I Am Their Flag" to mark the 112th anniversary of the statue's unveiling, September 14, 2012.
Gary Emord-Netzley/Associated Press

Over the past 20 years, H.K. Edgerton — a onetime president of the Asheville branch of the NAACP — has become one of the most popular attractions in the Confederate heritage movement. At gatherings of the Sons of Confederate Veterans and United Daughters of the Confederacy, his performances vindicate the belief of white audiences that the Confederacy did not fight to preserve the institution of slavery and that thousands of enslaved men fought as soldiers in the Southern army.

While both of these claims are false, Edgerton is not the first African American to perpetuate a distorted, celebratory history of the Confederacy. Like those before him, spreading such false stories may bring Edgerton personal fame, but they have dangerous consequences for African Americans pushing for racial equality more broadly.

Slavery was the cornerstone of the Confederacy and its military. During the Civil War, many slaves were forced to accompany their masters into the army as body servants or camp slaves. Their presence on the battlefields and later at reunions reinforced the belief among white Southerners that slavery was benign and that slaves supported the Confederate cause. These men likely chose to take part in these reunions for their own self-interested reasons.

The participation of former camp slaves in Confederate veterans’ reunions preserved a particular memory of the war that overlooked the actual desire of many slaves for freedom. It also reinforced political and racial orthodoxies — notably deference to white authorities — that had taken shape during the antebellum period and was being re-implemented by states as the Jim Crow era descended across the South.

Former camp slaves participated in reunions often under the patronage of their one-time masters or the surviving members of the unit in which they served. Welcomed as “mascots,” a reference that reflected their subordinate status, these African American men secured their reputation by speaking out in favor of the Democratic Party or against the Republican Party. One former Virginia camp slave was described favorably as “entirely unreconstructed” — a shorthand way of stating that he never joined the Republican Party after the war and that he knew his place in society.