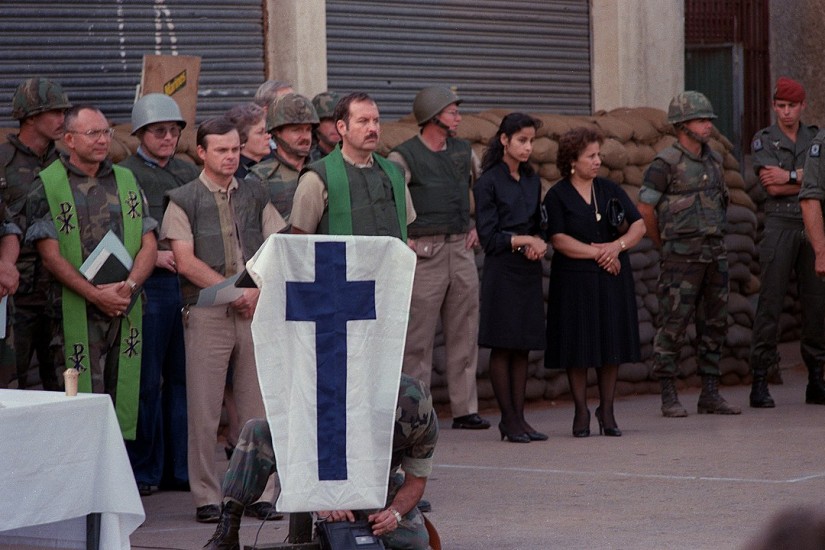 Chaplains, U.S. Marines and family members observe a moment of silence at memorial services for the 241 Marines killed during the bombing of the barracks at Beirut International Airport.
defenseimagery.mil/Wikimedia
…

In October of 1983, a truck filled with explosives leveled the four-story U.S. Marine Barracks in Lebanon, killing 241 American military personnel. The intelligence community laid responsibility for the act at the feet of Tehran’s mullahs, who’d tasked Hezbollah, their proxy in Lebanon, with pushing the U.S. (which had deployed the Marines as part of a multinational peacekeeping mission) out of the region. The incident (the largest non-nuclear explosion since World War Two, as we were told at the time), touched off a legendary internal Reagan Administration dispute over how, and whether, the U.S. should retaliate.

As debates go, this was a take-no-prisoners donnybrook: on the one side was the outwardly soft-spoken and professorial Secretary of State George Shultz (in fact, he was a nasty infighter whose sneering personnel evaluations could end careers), and on the other Secretary of Defense Caspar Weinberger, a craggy and confrontational workaholic beloved by the military’s most senior leaders. Even before the dust had settled in Beirut, Shultz and Weinberger were weighing in with Reagan on what to do about it—-with Shultz arguing for a full military response, while a shrugging and seemingly detached Weinberger dragged his feet.

The Secretary of Defense had opposed the deployment of the Marines to begin with, and had the support of the military. Colin Powell, Weinberger’s senior military assistant, spoke for many of the military’s leaders when he described the Lebanon deployment “goofy from the beginning.”

For Shultz, however, revisiting the deployment decision was a waste of time. In a series of knock-down-drag-outs that pitted him against Weinberger, the Secretary of State argued that “American credibility” (that old standby), was being tested and that, therefore, the deaths of 241 U.S. Marines was cause enough for a military escalation.

Weinberger disagreed: “retaliation against who?” he asked. Slow-rolling the president, he argued that the U.S. needed better intelligence before deciding who to punish. Weinberger was adamant: the U.S. had just left one unwinnable conflict (in Vietnam), and shouldn’t be so quick to start another. He dug in.

On November 17, in an incident that remains controversial, Weinberger seems to have actually disregarded a presidential order for a retaliation. The operation, against Iranian-linked military assets, never came off — though it remains unclear, more than thirty years later, just who was responsible for stopping the operation. Reagan’s national security adviser, Robert McFarlane, was livid — shouting at Weinberger during a telephone conversation that he’d ignored the president’s direct order. Weinberger disagreed: he’d received no such order, he calmly explained.