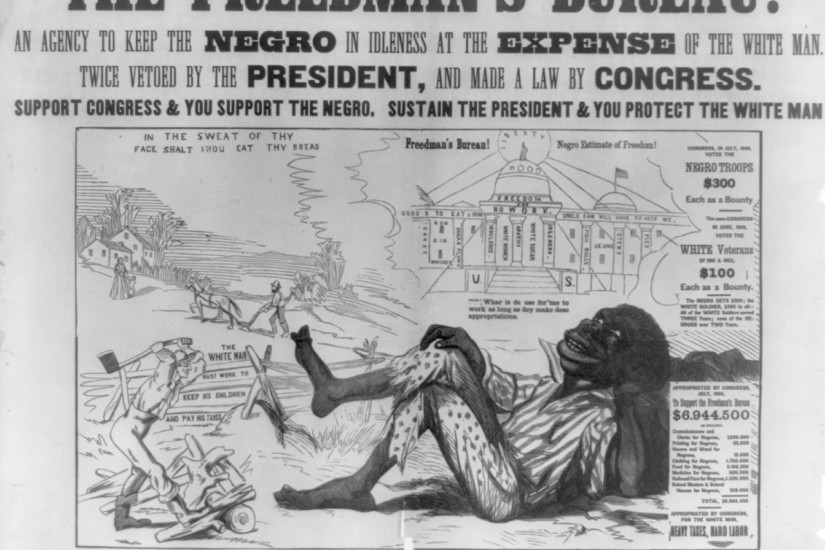 A racist poster attacking Radical Republicans on the issue of black suffrage, issued during the Pennsylvania gubernatorial election of 1866
Library of Congress
…

The usual story of Reconstruction blames its failure on the racism of Southern whites, helped by accidental President Andrew Johnson. But Confederates did not control national politics; their stock was too low after losing a war that had killed more than 600,000 Americans and cost more than $6 billion to control anything. Northerners controlled national politics.

Reconstruction failed not because Southern whites opposed it — although most of them did — but because Northerners abandoned it. They came to believe that antebellum slaveholders were right in one important way: they had warned that poor workers must not be allowed to vote because, given the chance, they would insist on a redistribution of wealth.

Northerners in 1861 began a four-year crusade to remake the American government so that wealthy men would not dominate it. They poured out their blood and sacrificed their brothers for that cause. Ten years later, that course would be reversed. America depended not on human equality, they came to think, but rather on what slaveholders had always said: the protection of property.

The story of this momentous change depended on a strange twist of politics that brought together a coup in Paris, industrialization in New York City, and black suffrage in South Carolina in the year before a presidential election. Those three seemingly disparate events came together in a toxic mix that linked antisocialism and racism in American thought so tightly that they have never come undone.