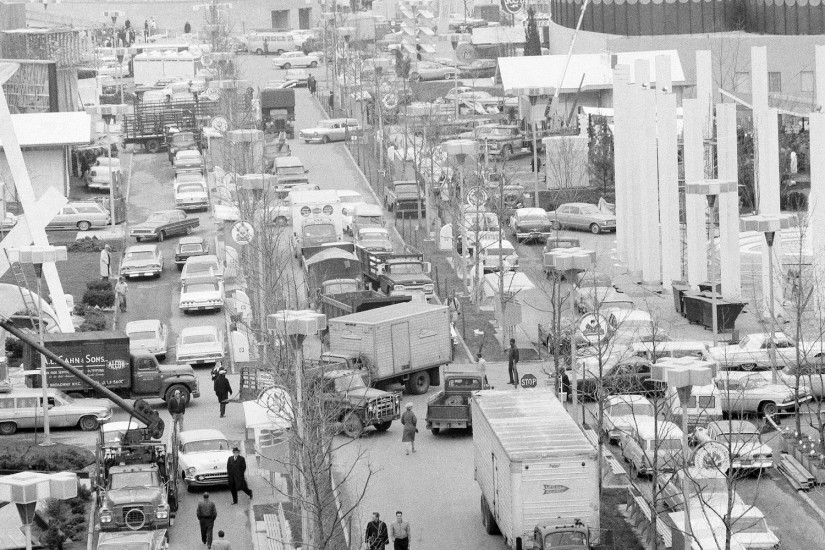 The streets of New York’s World’s Fair are jammed with cars and trucks as traffic is snarled on the eve of opening day on April 21, 1964.
Associated Press
…

Until then, despite having been in cars all my life, I’d failed to recognize the ease with which an errant movement, the equivalent of knocking into someone on a crowded bus, could bring about an injury or a death. As I jolted around the lot, I imagined myself on the road, in traffic, and felt a tight spasm of panic in my chest. I was eighteen. It had been all I could manage to remain on top of my un-botchable after-school job watering the neighbors’ bonsai trees. By the end of day, the idea of not driving—of not entering a future in which, day to day, I’d risk becoming an accidental killer of children—seemed freeing and bright. I never had a second lesson.

For years, I counted this inability to drive as one of many personal failures. More recently, I’ve wondered whether I performed an accidental kindness for the world. I am one of those Darth Vader pedestrians who loudly tailgate couples moving slowly up the sidewalk, and I’m sure that I would be a twit behind the wheel. Perhaps I was protected from a bad move by my own incompetence—one of those mercies which the universe often bestows on the young (who rarely appreciate the gift). In America today, there are more cars than drivers. Yet our investment in these vehicles has yielded dubious returns. Since 1899, more than 3.6 million people have died in traffic accidents in the United States, and more than eighty million have been injured; pedestrian fatalities have risen in the past few years. The road has emerged as the setting for our most violent illustrations of systemic racism, combustion engines have helped create a climate crisis, and the quest for oil has led our soldiers into war.

Every technology has costs, but lately we’ve had reason to question even cars’ putative benefits. Free men and women on the open road have turned out to be such disastrous drivers that carmakers are developing computers to replace them. When the people of the future look back at our century of auto life, will they regard it as a useful stage of forward motion or as a wrong turn? Is it possible that, a hundred years from now, the age of gassing up and driving will be seen as just a cul-de-sac in transportation history, a trip we never should have taken?