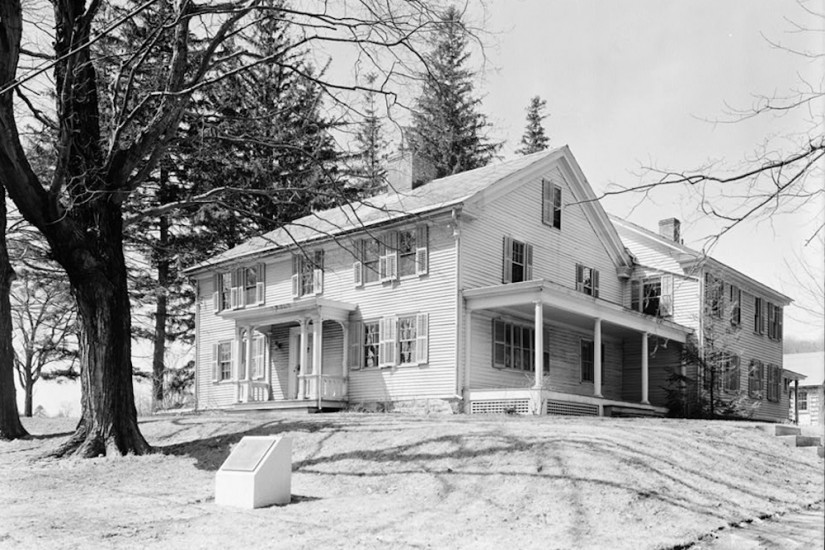 I have a sort of sea-feeling here in the country, now that the ground is all covered with snow,” Melville wrote from Arrowhead, in December of 1850. “I look out my window in the morning when I rise as I would out of a port-hole of a ship in the Atlantic. My room seems a ship’s cabin; & at nights when I wake up & hear the wind shrieking, I almost fancy there is too much sail on the house, & I had better go on the roof & rig the chimney.”

Locked in his study like Ahab in his cabin, the women his crew, Melville felt he had the whole book in his head; it was just a matter of getting it down. “Taking a book off the brain,” he wrote to a friend, “is akin to the ticklish & dangerous business of taking an old painting off a panel—you have to scrape off the whole brain in order to get at it with due safety—& even then, the painting may not be worth the trouble.” He rose at around eight in the morning and wrote until two-thirty in the afternoon, when he took a break to eat, and to feed his horse and cow their dinner. He despised interruption. “Herman I hope returned home safe after dumping me & my trunks out so unceremoniously at the Depot,” his furious mother wrote. “He hurried off as if his life had depended upon his speed.”

Every day, on board the Pequod, Ishmael looks out for a glimpse of Ahab, with a peg leg made out of whalebone. Finally, in Chapter 28, the captain emerges:


He looked like a man cut away from the stake, when the fire has overrunningly wasted all the limbs without consuming them, or taking away one particle from their compacted aged robustness. His whole high, broad form, seemed made of solid bronze, and shaped in an unalterable mould, like Cellini’s cast Perseus. Threading its way out from among his grey hairs, and continuing right down one side of his tawny scorched face and neck, till it disappeared in his clothing, you saw a slender rod-like mark, lividly whitish. It resembled that perpendicular seam sometimes made in the straight, lofty trunk of a great tree, when the upper lightning tearingly darts down it, and without wrenching a single twig, peels and grooves out the bark from top to bottom, ere running off into the soil, leaving the tree still greenly alive, but branded.

A half-inch hole had been drilled into the plank of the quarterdeck. “His bone leg steadied in that hole; one arm elevated, and holding by a shroud; Captain Ahab stood erect, looking straight out beyond the ship’s ever-pitching prow.” It might just be the best entrance in American literature. He’s like one thing, he’s like another, or another, or another, or yet another. To the devil you and your daguerreotype! Prose, man! Poetry! Philosophy! Meet thee evil! “For a Khan of the plank, and a king of the sea, and a great lord of Leviathans was Ahab.” Melville wrote with sharpened bone. He meant his scope to be the whole great whale of the world.
…
View on The New Yorker
View Connections