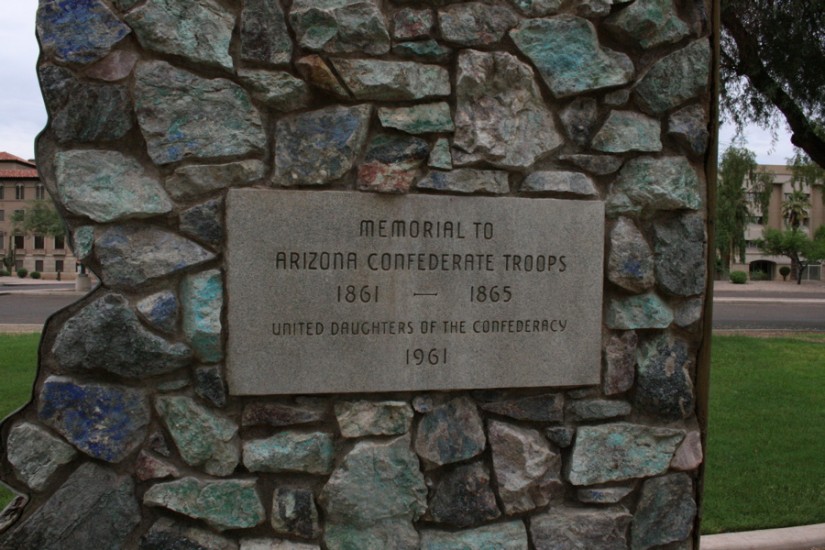 The news that black community leaders are calling on Governor Doug Ducey to take down six Confederate memorials spread around the internet on Monday night, prompting people around the country to ask, "Wait, Arizona was part of the Confederacy?"

The answer is yes, kind of: Southerners who settled here briefly claimed the lower half of the state (which back then was only a territory) for the Confederate States during the Civil War. During that time, the federal government never recognized the fact that a portion of the Arizona Territory had abandoned the Union.

But Arizona's Confederate memorials don't date back to that era.

They tell another, even less well-known story: one of white Southerners who moved to Arizona in the post-World War II era and brought their fondness for intimidating black citizens with them. The state's oldest Confederate memorial was dedicated nearly 80 years after the Civil War ended, in 1943. The newest, shockingly, went up in 2010.

For decades after the end of the Civil War, there was little effort made to commemorate the fact that Arizona had been on the wrong side of history. As historian William Stoutamire details in the Journal of Arizona History, most supporters of the Confederacy either left Arizona or were arrested for treason after Union troops from California showed up in Tucson.

When the Civil War came to an end, people who had sided with the Union returned to southern Arizona, vastly outnumbering the remaining Confederate sympathizers. The Arizona chapter of the United Daughters of the Confederacy didn't get started until 1919 — some 30 years after similar groups honoring Union veterans had been established here.