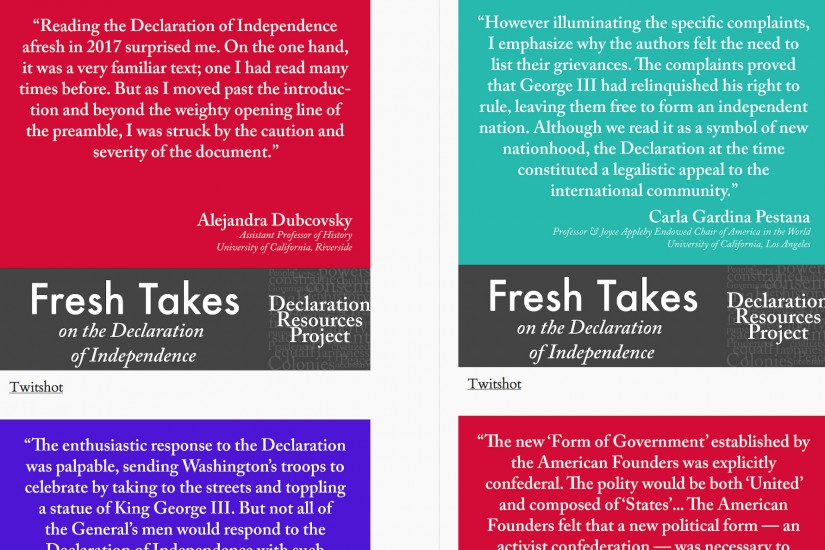 In January 1777, John Hancock wrote, “there is not a more distinguished Event in the History of America, than the Declaration of her Independence—nor any that in all Probability, will so much excite the Attention of future Ages...”

In this “future Age", many Americans quote the Declaration of Independence — “life, liberty, and the pursuit of happiness”, especially — without reading or appreciating the entire document. We call a signature “John Hancock” without contemplating why or how Hancock's signature became so iconic. We celebrate Independence Day on the 4th of July without considering the 2nd of July, the day John Adams believed would be celebrated  “by succeeding Generations, as the great anniversary Festival.” We envision the signed parchment Declaration at Independence Hall in 1776 and at the National Archives in Washington, D.C. today without imaging the more than two centuries of travel and change in custody in between. We think that we know everything there is to know about the Declaration of Independence.

The Declaration Resources Project was established at Harvard University by professor and political philosopher Danielle Allen in 2015. In the course of researching, writing, and discussing her book, Our Declaration, Professor Allen realized that we do not know everything there is to know about this important document in the history of American politics, culture, and identity. Prominent historians including Pauline Meier, Gary Wills, John H. Hazleton, and Julian Boyd have written tremendous books on the Declaration of Independence, but there is more work to be done. Previously unknown copies of the Declaration surface every few years, and innovations in technology and archival practice allow us to approach documents in new and exciting ways. There are still questions to be answered about the text itself, the signers, and even how news of the Declaration spread around the new United States and eventually the world.

The mission of the Declaration Resources Project is to create innovative and informative resources about the Declaration of Independence. By encouraging today's Americans to take a deeper look at this document, and by taking advantage of digital literacy and new media, we hope to tackle the mysteries of the Declaration, replace folklore with equally fascinating true stories, and demonstrate the ways in which engagement with fundamental primary sources can influence civic identity and education.