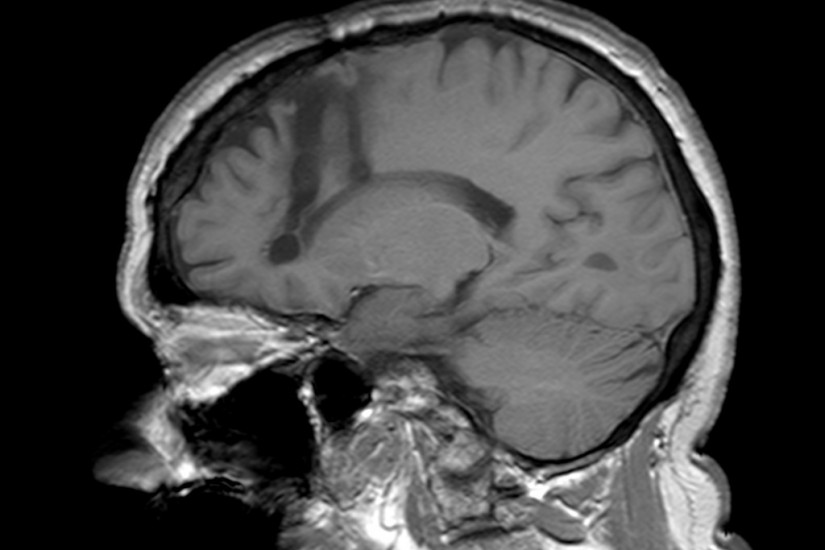 MRI of a frontal leukotomy (synonym for lobotomy), performed in the 1970s as a treatment for a man with OCD.
Frank Gaillard/Wikimedia Commons

On November 19, 1948, the two most enthusiastic and prolific lobotomists in the Western world faced off against each other in the operating theater at the Institute of Living in Hartford, Connecticut. They performed before an audience of more than two dozen neurosurgeons, neurologists, and psychiatrists. Each had developed a different technique for mutilating the brains of the patients they operated on, and each had his turn on the stage.

William Beecher Scoville, professor of neurosurgery at Yale, went first. His patient was conscious. The administration of a local anesthetic allowed the surgeon to slice through the scalp and peel down the skin from the patient’s forehead, exposing her skull. Quick work with a drill opened two holes, one over each eye. Now Scoville could see her frontal lobes. He levered each side up with a flat blade so that he could perform what he called “orbital undercutting.” Although what followed was not quite cutting: instead, Scoville inserted a suction catheter—a small electrical vacuum cleaner—and sucked out a portion of the patient’s frontal lobes.

The patient was then wheeled out and a replacement was secured to the operating table. Walter Freeman, a professor of neurology at George Washington University, was next. He had no surgical training and no Connecticut medical license, so he was operating illegally—not that such a minor matter seemed to bother anyone present. Freeman was working on developing an assembly-line approach so that lobotomies could be performed quickly and easily. His technique allowed him to perform 20 or more operations in a single day. He proceeded to use shocks from an electroconvulsive therapy machine to render his female patient unconscious and then inserted an ice pick beneath one of her eyelids until the point rested on the thin bony structure in the orbit. A few quick taps with a hammer broke through the bone and allowed him to sever portions of the frontal lobes using a sweeping motion with the ice pick. The instrument was withdrawn and inserted into the other orbit, and within minutes, the process was over. It was, Freeman boasted, so simple an operation that he could teach any damned fool, even a psychiatrist, to perform it in 20 minutes or so.

Tens of thousands of lobotomies were performed in the United States from 1936 onward, and both these men would continue operating for decades. Lobotomy’s inventor, the Portuguese neurologist Egas Moniz, received the Nobel Prize in Medicine for his pains in 1949. Major medical centers in the United States—Harvard, Yale, Columbia, the University of Pennsylvania—regularly performed variations on the basic operation well into the 1950s.