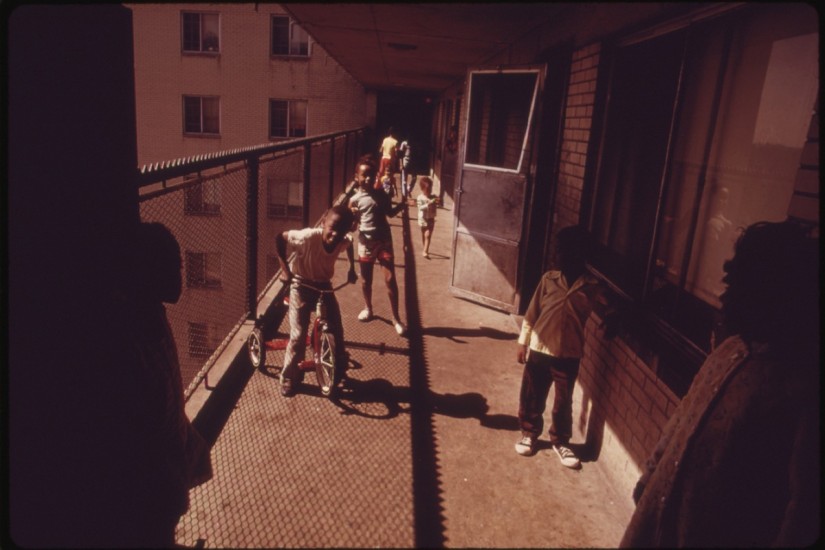 Residents on a balcony of the Robert Taylor Homes, a low-income highrise apartment building in Chicago where the author's father lived (1945).
John H. White/Wikimedia Commons
…

Americans are uncomfortable talking about money. We use careers, homes, and clothing to stand in as proxies. Certain markers in these areas signify wealth, regardless of the actual amount in your bank account. I harbor no delusions about how privileged my family and I are. As an adult, I am thankful every day for how much my family sacrificed for my freedom. But I also know that, as a whole, black wealth is delicate, because for generations lawmakers and power wielders attempted to prevent African Americans from building it. When I set out to write this story, I wanted to better understand the intricate narratives that make wealth in the black community so complex. My own understanding was rooted in the idea that while my family represented a version of the American dream, the injustices that have kept black families without a safety net for generations still reverberated throughout our history. I found those historical echoes still ringing in the stories of other families, too.

A raft of policies responsible for building the American middle class destroyed opportunities for black people to build intergenerational wealth. According to 2013 data from a paper by the progressive think tank Institute for Policy Studies, if the average wealth held by white families magically stopped growing, it would take 228 years for the average wealth held by African Americans to catch up. When researchers from the institute looked at median wealth from 1983 to 2016 (adjusting for inflation), black families saw their wealth decrease by more than half, while white families saw theirs rise by 33 percent. While white families have a median wealth of $171,000, black families have a median wealth of just$17,600. These relationships aren’t fixed. Once you get a certain amount of wealth, keeping it within your family is much easier. It took until 1976 for the government to introduce the generation-skipping transfer tax, which was instituted to stop individuals from avoiding federal estate taxes by leaving money to their grandchildren. In 2010 (when the estate and generation-skipping taxes were briefly repealed), an estate could again escape paying those taxes on its fortunes. In Donald Trump’s 2019 State of the Union address, he praised himself for raising the estate-tax exemption to $11.2 million, which resulted in, the Tax Policy Center estimates, taxing less than 0.1 percent of estates (or about 1,900 households). America’s tax system protects the wealth that already exists, instead of the wealth that might exist if more families were in a position to build it.