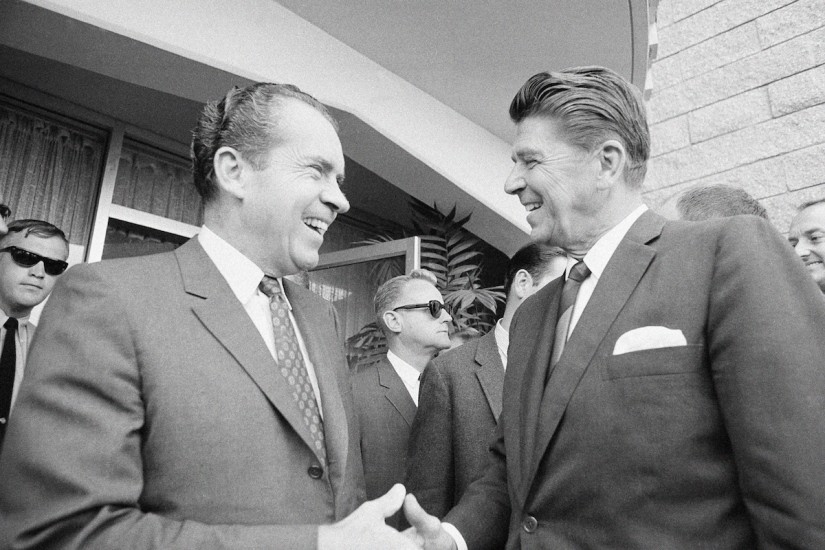 Richard Nixon greets Gov. Ronald Reagan in San Diego on August 16, 1968, to confer with Nixon and his staff about their plans for the fall campaign.
AP Photo/Henry Burroughs

On Tuesday, the historian Tim Naftali published the text and audio of a taped call between Ronald Reagan and Richard Nixon from October, 1971. Reagan, who was then the governor of California, gave his opinion of the African delegates to the United Nations who voted against the United States’ position that Taiwan, rather than the People’s Republic of China, should receive U.N. recognition. “To see those, those monkeys from those African countries—damn them, they’re still uncomfortable wearing shoes!” Reagan exclaimed. Nixon laughed heartily and went on to tell the Secretary of State, William Rogers, about Reagan’s outburst, in part to express that many Americans shared such bigotry. Hearing the interaction between Reagan and Nixon led Naftali, who is not averse to drawing parallels to the present, to write about “the dynamic power of racism when it finds enablers.”

I recently spoke by phone twice with Naftali, a professor of history and public service at N.Y.U., who was also the first director of the Nixon Presidential Library and Museum, in Yorba Linda, California. During our conversations, which have been edited for length and clarity, we discussed the importance of the Nixon–Reagan relationship, the ways Nixon differs from Donald Trump, and the reason this tape took so long to reach the public.

One thing that struck me about this audio was that on some of the Nixon tapes, Nixon is the one being racist or bigoted, and his underlings are fawningly trying to catch up to him, or echo him. Here Reagan is the one leading the charge. Was this a new dynamic?

What I found interesting about this, besides the revealing imagery used by Ronald Reagan, was that Nixon acted as if Reagan unlocked a trope that he, Nixon, wanted to use and felt he could use by quoting Reagan. Nixon went into this conversation angry at the African delegates at the U.N. We know that because he previously called Alexander Haig, his deputy national-security adviser, and said—I am paraphrasing—“Am I supposed to meet with any African leaders here? I recall I said yes to a list you sent over, and I want to know who they are, because they voted against me. I don’t want to see them. I don’t care if I promised to see them.

And when Reagan calls Nixon, Reagan has a whole idea about what the U.S. should do to penalize the U.N. for voting to kick out Taiwan. Nixon doesn’t think it is a workable approach at all, and tells his Secretary of State, William Rogers, we can’t do this. But what Nixon finds interesting, exciting, and worth repeating, is how Reagan dramatically describes the African delegation that Nixon is so angry at. Earlier that month, Nixon had been explaining to Daniel Patrick Moynihan—an academic who had worked in the White House—about how he had been thinking about how, in his mind, “blacks” just had a hell of a time governing. And that [Reagan’s comments] really said something to him, and that squared with things he was reading about this noxious idea of a connection between I.Q. and race.