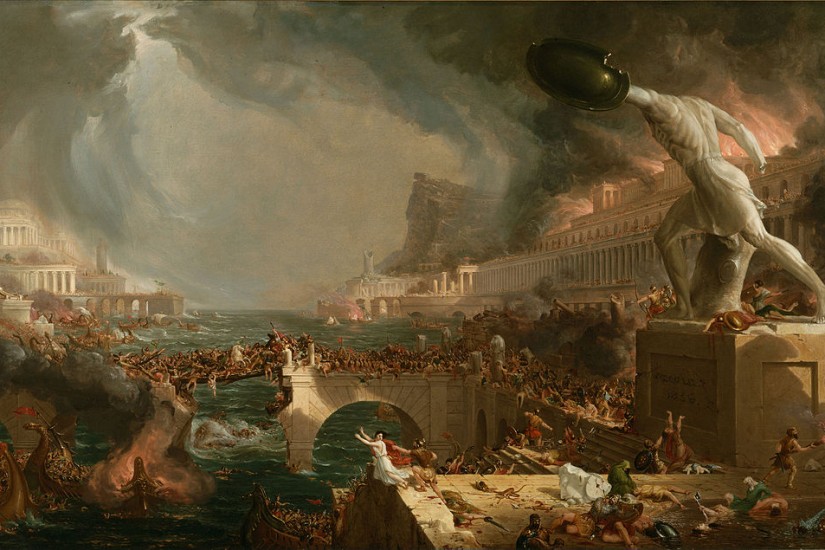 The conviction that Trump is single-handedly tipping the United States into a crisis worthy of the Roman Empire at its most decadent has been a staple of jeremiads ever since his election, but fretting whether it is the fate of the United States in the twenty-first century to ape Rome by subsiding into terminal decay did not begin with his presidency. A year before Trump’s election, the distinguished Harvard political scientist Joseph Nye was already glancing nervously over his shoulder at the vanished empire of the Caesars: “Rome rotted from within when people lost confidence in their culture and institutions, elites battled for control, corruption increased and the economy failed to grow adequately.” Doom-laden prophecies such as these, of decline and fall, are the somber counterpoint to the optimism of the American Dream.

And so they have always been. At various points in American history, various reasons have been advanced to explain why the United States is bound to join the Roman Empire in oblivion. In 1919, in the wake of the Russian Revolution, The New York Times warned that the Huns and the Vandals were massing again. “The Roman Empire and its civilization were destroyed by barbarian hordes coming from the East—and it is from the east that comes the wind.” Thirty years earlier, visiting the abandoned Roman city at Baalbek in Lebanon, Brooks Adams—the great-grandson of John Adams—had been inspired by the spectacle of shattered greatness to dread that his own country’s gilded age was bound to end in similar ruin. In the decades before the Civil War, opponents of slavery repeatedly cited the fall of Rome as a warning of what might happen to a slave-owning society. In the 1830s, opponents of Andrew Jackson cast him as a dictator and a demagogue whose tyranny would inevitably bring the infant republic to share in the fate of the ancient empire. Present anxieties that Trump’s presidency portends America’s decline and fall are the contemporary expression of a tradition quite as venerable as the United States itself.

Just as Americans today look back wistfully to the Founding Fathers as patrons of an age of rugged independence and virtue, so did the Founding Fathers look back with an equal wistfulness to the early years of Rome. There, for any young republic victorious in a war against a great monarchy, a morality tale was to be found that could hardly help but serve as inspiration.