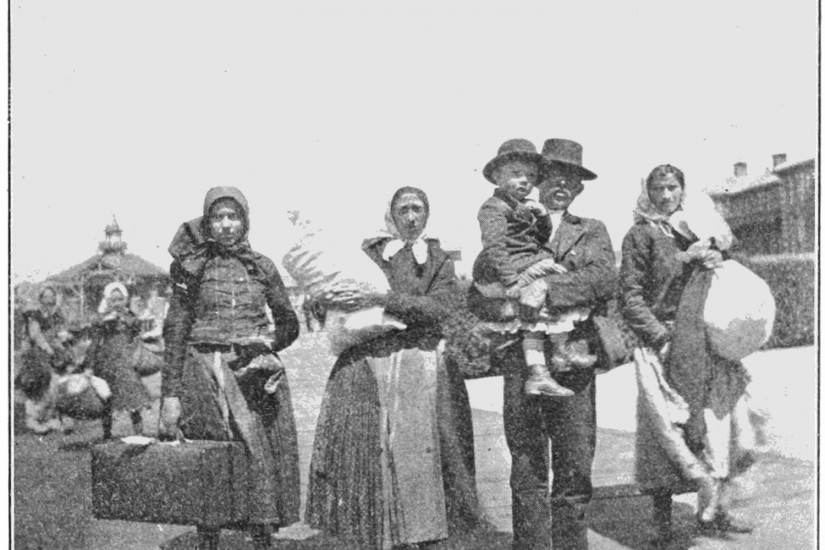 Immigrants from Europe pose for a photograph upon their arrival at Ellis Island (1913).
Wikimedia Commons

The United States has a long history of denying public support to immigrants. Some policies were put into place not too long ago—Bill Clinton’s 1996 welfare-reform legislation severely restricted immigrants’ access to benefits, as the Post points out. The country also has a long history of denying entry to immigrants who come from poverty, as the historian Hidetaka Hirota writes in his new book, Expelling the Poor. The language of the Trump administration’s alleged new proposal is not a departure from past policies, but a continuation. And as in the past, the new policy may lead to discrimination, whether implicit or overt.

I talked with Hirota, a visiting assistant professor at the City College of New York, about the way poverty has shaped government policies on immigration. Our conversation has been edited for clarity and length.

Emma Green: What’s the historical connection between poverty and immigration restrictions in the United States?

Hidetaka Hirota: Immigration restriction in the United States was rooted in poverty. The British colonists introduced a law which regulated the movement of the poor, including the expulsion of poor people from their territory. That model developed into passenger laws for prohibiting the landing of poor people. The critical turning point came in the 1840s and ’50s, when a large number of impoverished Irish immigrants arrived in the United States. New York and Massachusetts were two major receiving states. They responded by enhancing and strengthening their laws to more effectively restrict the immigration of poor Irish people.

This really laid a framework for immigration control in the United States. In the 1870s, when the U.S. Supreme Court declared some of the state passenger laws unconstitutional, these two states started a campaign to transform their state laws into federal laws. The result was America’s first national immigration laws.

Green: How do you tease apart Americans’ economic reasons for wanting to keep immigrants out versus cultural or religious prejudice?

Hirota: These laws were targeted against poor immigrants, rather than against all Irish immigrants. In that sense, the poverty of immigrants was at the core of state-level immigration policy.