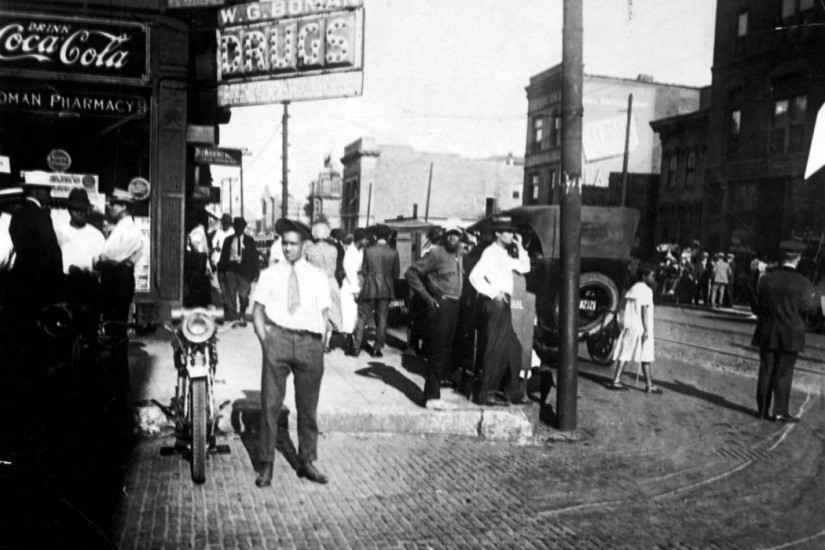 Photograph taken in Chicago two days after the end of the riots, near where much of the violence took place, August 5, 1919.
Wikimedia Commons
…

What to call the racial violence is the first challenge. Race riot is, as Ursula Wolfe-Rocca of the Zinn Education Project pointed out, a problematic term, implying that everyone caught up in the violence was equally responsible for the disorder. Yet almost every instance of racial violence in 1919 began with white people organizing to attack African Americans for specific purposes: to drive them from jobs and homes, to punish or lynch them for alleged crimes or insults against whites, to block black advancement. In Chicago, for example, white gangs carried out home invasions to drive black residents from houses in previously all-white neighborhoods. To call such actions “riots” minimizes their overtly racist intent and overlooks the instigators.

Although Red Summer captures the scope of the violence, it doesn’t convey the purpose or totality of white mob attacks directed at African Americans during 1919. In my work on 1919’s racial violence, I propose using antiblack collective violence as a replacement for race riot. In some instances, the terms massacre and pogrom are warranted: in Phillips County, Arkansas, in the fall of 1919, white mobs and posses killed more than 200 African Americans in a frenzy that grew out of a pre-meditated attack on a union meeting of black sharecroppers. The very words we use to describe 1919’s violence can be a step toward an unflinching, complete understanding of the event’s significance and legacy.

Another challenge: to acknowledge the victimization of African Americans while also recognizing their sustained resistance through armed self-defense. In Washington, D.C., hundreds of black residents formed a cordon to deter white mobs; in Chicago, black veterans recently returned from combat during World War I put on their uniforms and patrolled streets to stop mobs when the police couldn’t or wouldn’t. Resistance also took the form of legal campaigns to clear African Americans charged with crimes for defending themselves and to pressure prosecutors to bring charges against attacking whites. Black self-defense is yet another reason to jettison the term race riot: in fighting back, African Americans were resisting, not rioting.

Typical narratives about 1919’s antiblack collective violence, especially in school textbooks, often conclude abruptly: the attacks ended, the affected community moved on. Such treatment isolates the violence, implying it was an aberration without lasting effects. Yet for African Americans, discrimination and the upholding of white supremacy took other forms. Many cities are examining this problem through programming related to remembrance of 1919.