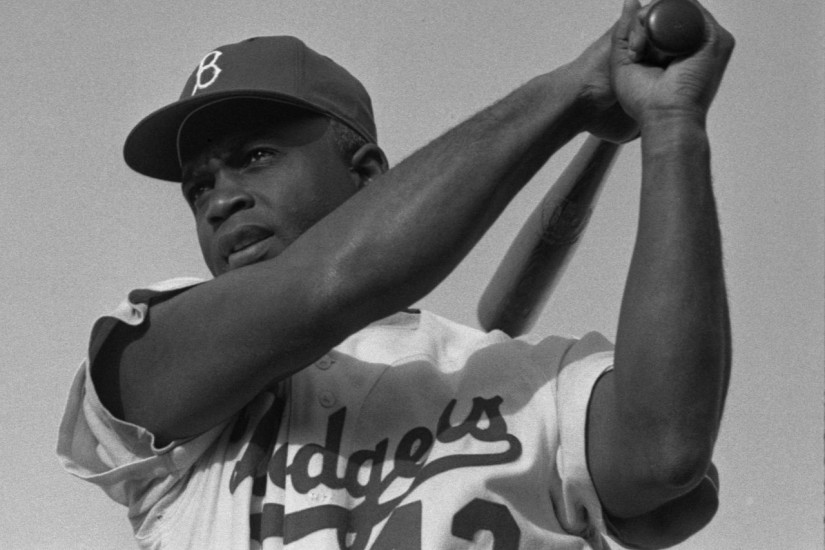 Jackie Robinson in his Brooklyn Dodgers uniform, 1954.
Library of Congress

On April 15, 2017, Major League Baseball (MLB) celebrated the 70th anniversary of Jackie Robinson’s first MLB game. On that date in 1947, Robinson’s Brooklyn Dodgers took to Ebbets Field to play against the Boston Braves. Fifty years later, MLB retired Robinson’s jersey number 42 across the league, and since 2007, players gather on the field to pay homage to Robinson by wearing his number on their jerseys. Robinson’s accomplishments on the field have been well documented and even popularized on the big screen with adaptations such as the recent film 42. We should recognize Robinson’s contributions on the diamond and the ways he maintained his outward composure while facing blatant racism. However, we must also remember the courageous and confrontational moments when Robinson openly pushed back against Jim Crow segregation in the United States.

When Robinson entered the league, Branch Rickey, the Dodgers’ owner, told him to remain silent when facing overt anti-black antagonism. In 1949, Rickey lifted those “restrictions” and Robinson began to speak out publicly against the strictures of Jim Crow. The most notable example of his race activism occurred in 1949 when the House Un-American Activities Committee called upon him to appear before them in order to speak against popular film star Paul Robeson and the “un-American” comments he made in Paris earlier that year.1 Robinson did address Robeson’s comments, but more importantly, he used his appearance as an opportunity to deplore the government for directly allowing the injustice of Jim Crow segregation to persist while hypocritically claiming equality for all. He boldly told the committee, "[W]hite people must realize that the more a Negro hates communism because it opposes democracy, the more he is going to hate any other influence that kills off democracy in the country—and that goes for [Jim Crow]."

Later, in his 1972 autobiography, the hall of famer writes about how he typically responded to people who asked him why he had a “beef” with America even though he had ostensibly “made it.” Robinson simply told them, “I’m grateful for all the breaks and honors and opportunities I’ve had, but I always believe I won’t have it made until the humblest black kid in the most remote backwoods of America has it made.”