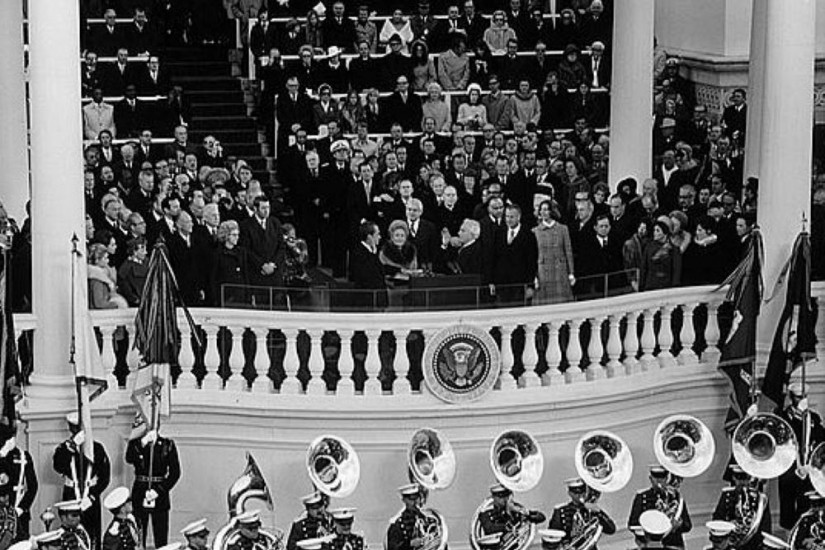 Chief Justice Warren E. Burger administering the oath of office to Richard M. Nixon on the east portico of the U.S. Capitol, January 20, 1973.
Library of Congress

In July 1969, Kevin Phillips, a 28-year-old staffer in the Nixon White House and special assistant to Attorney General John Mitchell, published a book boldly titled The Emerging Republican Majority. For nearly four decades, the Democratic Party’s New Deal coalition had dominated American politics. But in the book, Phillips argued that the old order had come to an end, and that a new conservative era was in the offing.

Nearly 500 pages long and filled with facts, figures, and maps, The Emerging Republican Majority contended that the GOP needed to move beyond its traditional base in the Northeast and reach out to white voters in the South and Southwest—a region Phillips dubbed the “Sun Belt”—and in suburbs across the nation with polarizing appeals on racial and social issues. The book attracted significant attention, appearing in bookstore windows nationwide. Newsweek christened it “the political Bible of the Nixon Era,” while National Review called it the most important political book in the generation.

The Emerging Republican Majority has loomed large in the minds of political operatives and observers ever since, as an essential guide to the Republican “southern strategy” that gave modern conservatism the depth and durability of New Deal liberalism. For his part, Phillips always insisted this was a misreading. “The book was not and is not a ‘strategy,’—Northern, Southern or Western,” he noted in the preface to the 1970 paperback edition. “The book is a projection—and one with a high batting average to date. Read it as such.”

In truth, it was both. Phillips’s projection was grounded in his assessment of recent Republican strategies. At the same time, he asserted that his analysis offered the best hope for the party’s future: pitting racial and ethnic groups against one another and capitalizing politically on the competitions and resentments that followed. “The whole secret of politics,” he told the journalist Garry Wills during the 1968 presidential campaign, is “knowing who hates who.”

That year, the GOP had convincing reasons for following Phillips’s lead. The segregationist Governor George Wallace made a strong showing in the South and elsewhere with a shoestring campaign as an independent, demonstrating that opposition to integration played well with some working- and middle-class white voters. Phillips saw the potential: If Republicans exploited tensions over civil rights, he argued, they could attract white voters in traditionally Democratic southern states, as well as in the Midwest and West. And if Republicans won those voters, they’d win the mantle of power too.

Fifty years later, it’s tempting to draw a straight line from The Emerging Republican Majority to the Republican Party today.
…
View on The Atlantic
View Connections