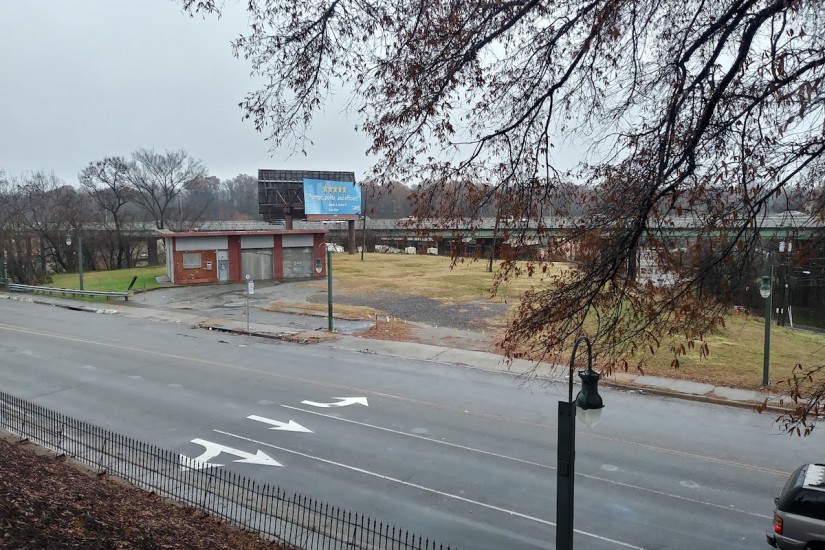 The site of the former "Graveyard for Free People of Colour and For Slaves," Richmond, VA.
sacredgroundproject.net

It is dark and noisy beneath the towering pillars holding Interstate 64 over what looks like wasted space near 5th and Hospital Streets in Richmond, Virginia.

Patches of overgrown grass sprout between cracks in the crumbling asphalt beneath the highway overpass; graffiti the color of old blood marks some of its supports. Rain-washed, sun-faded litter is everywhere. Lenora McQueen first saw the space in 2017 while seeking the final resting place of her fourth great grandmother, Kitty Cary—a woman who was born, lived and died enslaved. McQueen didn't know what she'd find, but she didn't expect what she did.

She saw an old gas station on the site of what was once the Grave Yard for Free People of Color and Slaves, established in the early 19th century. "I saw a highway running over it; I thought my GPS had gone haywire." McQueen remembers thinking as she drove past, "I hope this isn't it."

It would take years of McQueen’s dogged research and collaboration with historians, university professors and community advocates to determine that this unseemly patch of land was indeed the cemetery. Far beneath the crumpled cigarette packages and cast-off plastic bottles, McQueen and others realized, there are likely the remains of untold thousands of Black men, women and children. No marker tells this history, and information about the Grave Yard is somewhat sparse and confusing. Part of the parcel is privately owned, but the other part, the portion controlled by the state of Virginia, is the proposed location of a rail line to be built between Virginia’s capital city and Washington, D.C.

The city of Richmond, then a ganglion of America's thriving domestic slave trade but still decades away from naming itself the Capital of the Confederacy, established the Grave Yard for Free People of Color and Slaves in 1816. One acre of the grounds was devoted to free Blacks, another was reserved for burying the enslaved. This cemetery was the city's long-overdue response to petitions from the free Black community, who had for several years prior protested the ever-degrading condition of the previous Black cemetery, The Burial Ground for Negroes.

Richmond city maps of 1809 identified the old burial ground, and showed why it was an undesirable place for the Black community to lay their loved ones to rest.

"At that site there was a powder magazine and the city gallows [was] next to it," says Dr. Ryan Smith, a professor of history at Virginia Commonwealth University in Richmond. Smith says a mixed-race free man named Christopher McPherson led the free Black community in agitation against the old graveyard.