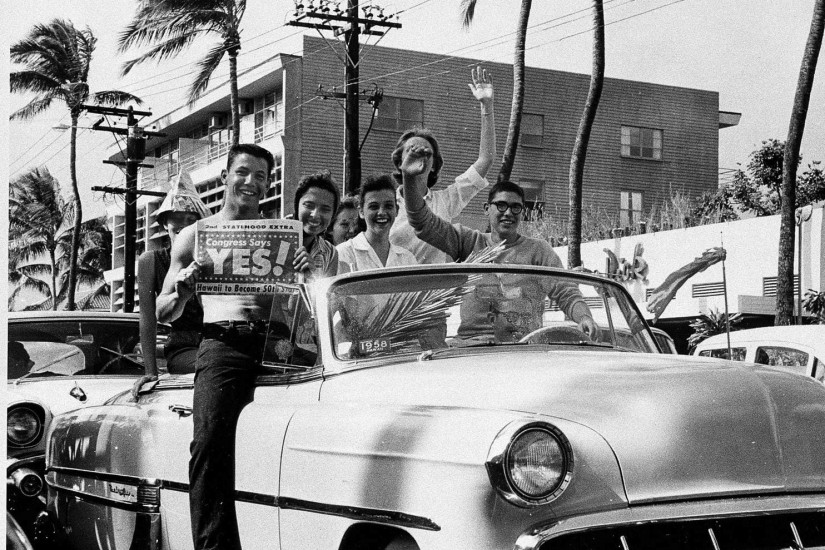 A group of supporters of statehood drive through the street in Waikiki, Honolulu, Hawaii, on March 13, 1959.
AP
…

For decades, Hawaii was an important military outpost that supported American economic ventures in Asia. But statehood was out of the question. The white minority in Hawaii feared that statehood would give political power to Asians, most who had come to the islands as imported laborers in the 19th and early 20th centuries to work on sugar plantations, the main source of white wealth in Hawaii.

Mainland Americans, meanwhile, saturated with a steady diet of “Yellow Peril” tropes, believed Asians in Hawaii were too foreign to be trusted with full democratic representation. It was this same attitude that led to laws, in effect from the late-19th century until after World War II, that restricted Asian migration and denied naturalized U.S. citizenship to Asian immigrants.

Hawaii’s status changed in the 1950s due to a series of overlapping developments. The white planter class backed statehood after Congress enacted the Sugar Act of 1934, which restricted sugar exports to the mainland. At the same time, a growing constituency of Asian Americans born in the territory — and thereby U.S. citizens — began agitating for statehood. In 1954 they propelled the Democratic Party to power in Hawaii, overturning the Republicans’ five-decade rule and putting more muscle behind the local statehood campaign.

But it was the Cold War and global decolonization that granted Hawaii and its people new strategic significance to the United States and made statehood possible. As the United States worked to win the allegiance of the decolonizing nations in Asia, members of Congress were increasingly concerned about the nation’s global image and eager to counter Soviet propaganda portraying the United States as a racist imperial power.

The campaign for statehood rested on claims that multiracial Hawaii would be both a “bridge to Asia” and proof of American racial egalitarianism. Though hardly a committed racial liberal, President Dwight D. Eisenhower supported statehood for the territory because Hawaii was “a successful laboratory in human brotherhood” that “would be a shining example of the American way to the entire Earth.” Hawaii statehood, in short, was great for public relations.

But this celebration of Hawaii as an exemplary community had some troubling implications.

For instance, to underscore Hawaii’s readiness for full inclusion in the nation, statehood supporters pointed to Puerto Rico as an example of a U.S. territory that shouldn’t become a state.