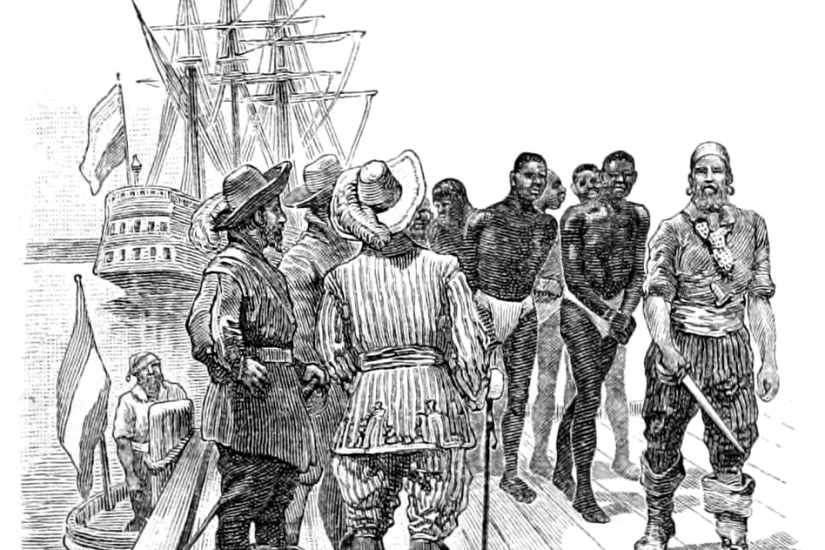 Illustration captioned, "The First Negro Slaves Brought to Virginia" from the book, "The Leading Facts of American History" (1910).
Wikimedia Commons

Her name was Angela, one of the first known Africans in British North America.

His name was John, the first known antiblack racist in colonial America.

Instead of David and Goliath, African America is the story of the petite Angela hopefully and hopelessly fighting off the giant John from 1619 to 2019 for life, liberty, and the pursuit of happiness. She was, perhaps, the beginning of hope, the North Star essential to anti-racism. He was, definitely, the beginning of all that makes her hopeless, the eclipse essential to racism. African Americans have every reason to be hopeful and every reason to be hopeless on this 400th anniversary of our birth in this land.

These 22 or 23 Africans, including Angela, who arrived this week 400 years ago were not the first to land in North America. Some Africans probably came before Christopher Columbus. During the 16th century, some probably accompanied Spanish explorers on expeditions to the Southwest and Southeast of the present-day United States. In 1526, a slave revolt stopped the Spanish from planting a slaveholding colony in present-day South Carolina. According to the historian Thomas C. Holt, “A muster roll for March 1619 shows that there were already thirty-two African slaves” in Virginia. But no one knows when and how they arrived. No one knows my ancestors’ exact birth date in this country.

African Americans, as a people, are like the enslaved Africans who never knew exactly when they were born. Some people were so young when kidnapped in West Africa, so young when sold down the river into Mississippi, that they never learned their birthday. So some folks chose a birthday, like African Americans choose a birthday—August 20, 1619—based on the first documented recognition of our arrival in Virginia. A different John, John Rolfe, married Pocahontas in 1614, and then produced African America’s birth certificate five years later, on this day.

Today feels more like the anniversary of the day I was diagnosed with metastatic cancer than a birthday. I live in fear of a reoccurrence like I live in fear that metastatic racism will never go away, that the African American will die off before racism does. It is a hopelessness that has always existed here, even among white people watching the war of worlds between Angela and John.