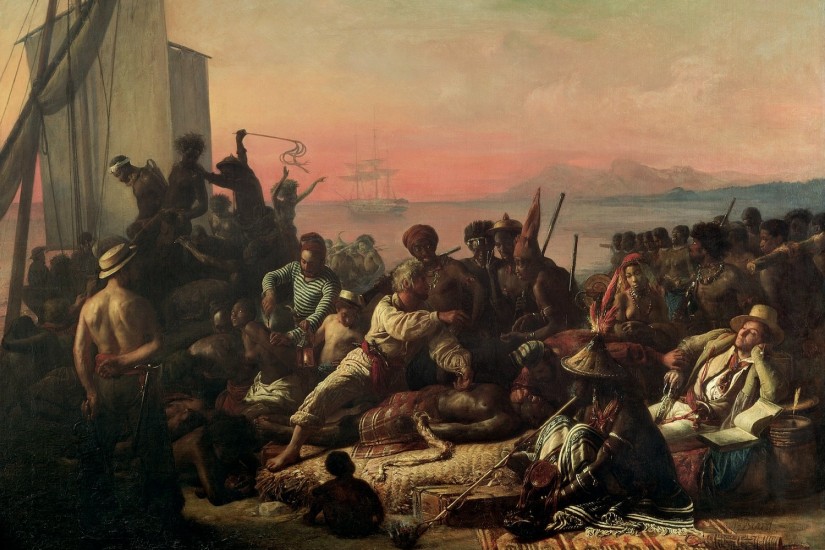 "The Slave Trade," or "Slaves on the West Coast of Africa," by François-Auguste Biard (ca. 1833).
Wikimedia Commons

The year 1619 is momentous in American history, as a recent visit by the current US president attests. In July, Donald Trump visited Jamestown, Virginia, to commemorate two events in 1619: the July creation of the colony’s representative government, the House of Burgesses, and the August arrival of people he termed “enslaved Africans”.

This phrase improves upon a commonplace in American discourse, the one-word “slaves”. But the term “enslaved”, in and of itself, merits further comment, as history and as ideology. How we use these words makes a crucial difference when we think about the meanings of our past.

People were not enslaved in Virginia in 1619, they were indentured. The 20 or so Africans were sold and bought as “servants” for a term of years, and they joined a population consisting largely of European indentured servants, mainly poor people from the British Isles whom the Virginia Company of London had transported and sold into servitude.

Enslavement was a process that took place step by step, after the mid-17th century. This process of turning “servants” from Africa into racialized workers enslaved for life occurred in the 1660s to 1680s through a succession of Virginia laws that decreed that a child’s status followed that of its mother and that baptism did not automatically confer emancipation. By the end of the seventeenth century, Africans had indeed been marked off by race in law as chattel to be bought, sold, traded, inherited and serve as collateral for business and debt services. This was not already the case in 1619.

Even in 1700, Africans were hardly the only unfree colonists, for a majority of those laboring in Virginia were people bound to service. They were indentured whites. Population numbers are crucial in understanding the demography of labor in early Virginia. By 1680, only about 7% of Virginians were of African descent; 20% of Virginians were of African descent by 1700, and by 1750, the 100,000 enslaved Virginian men and women accounted for more than half the population. Here lies the demography of enslavement.

In short, the 1619 Africans were not “enslaved”. They were townspeople in the Ndongo district of Angola who had been captured by Imbangala warlords and delivered to the port of Luanda for shipment to the Americas. Raiding, capturing and selling people was not an exclusively African practice.