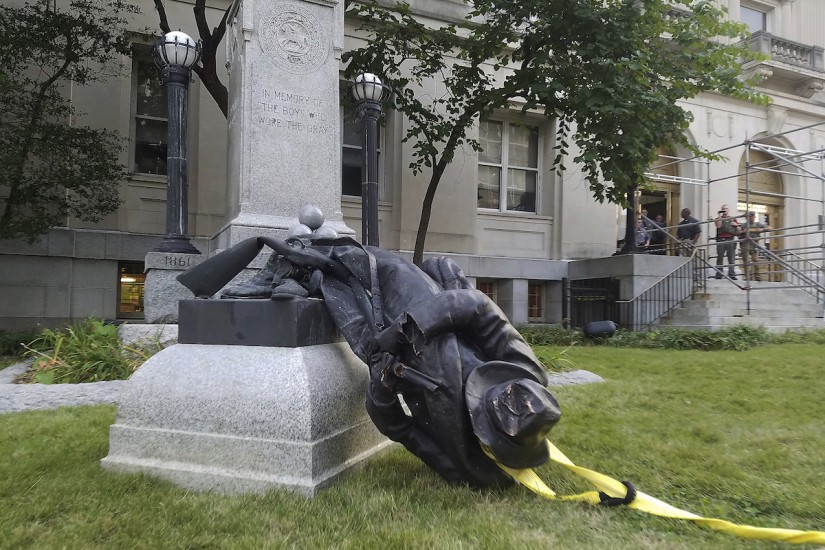 The "Silent Sentinel" statue in Durham, NC, after is was toppled by activists on Aug. 14, 2017.
Virginia Bridges/The Herald-Sun via AP, File
…

During our meeting on August 23, 2018, a combat veteran spoke eloquently about the message he took from the statue’s toppling. He had spent six years fighting another “illegal and unpopular war” (from his age, I assumed he meant Iraq). The men honored by Durham’s memorial were like him, he said: mainly the poor who “didn’t have much of a say any more than I did.” He noted that North Carolina, with its numerous military bases, is one of the most militarized states in the country and is on track to be home to the most veterans per capita by 2020. “I saw a replica of a human being like me getting a rope thrown around his neck and torn down.”

That comment moved me profoundly. Often, we heard statue protesters use the word traitor to describe Confederate soldiers. I’d flinch, since this seemed as much a twisting of history as the neo-Confederate refusal to acknowledge that the Civil War was about slavery. For me, there is a crucial difference between statues of the leading proponents and defenders of slavery, like John C. Calhoun or Robert E. Lee, and Durham’s memorial, meant to honor the average soldier. History tells us that North Carolina was profoundly divided on slavery, and many soldiers were forced to fight—something neither Defend Durham nor the neo-Confederates would acknowledge.

Like all young men who go to war, Durham’s Confederates marched off for reasons that likely had at least as much to do with the promise of adventure, pride in the home state, or a steady paycheck as with slavery. Regardless of the reason, few understood the risks, typical of any group of young men (and I speak as the parent of one). The risks included death not just in battle but also from disease, exhaustion, exposure, and—by far the greatest threat—starvation. By 1863, when Washington Duke was conscripted, the draft age had been raised to 50, a glaring sign of Confederate desperation.

Although my family, including the scalawag Kirks, has a long history of military service, my father’s immediate family members were conscientious objectors. But my father wanted to fly, so he joined the Navy. Before he got far, the Navy realized he had astigmatism and booted him out—just in time for him to be drafted by the Army. He was a young man with wild dreams who ended up angrily ticking off supply lists in a Korean Quonset hut. He hated the Army and ended up hating war.

If he had died in Korea, I don’t know if my mother would have valued a memorial symbolizing his sacrifice. But no one would have conflated his forced service with support of anything other than a determination to avoid being jailed as a draft dodger. I imagine some of North Carolina’s Civil War soldiers, Union and Confederate alike, were more like my dad than not.