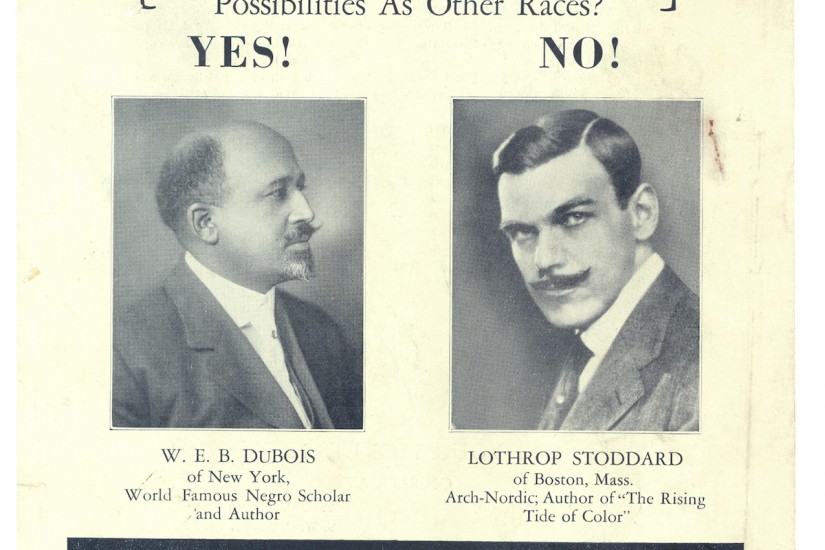 Poster for the 1929 debate between W.E.B. Du Bois and Lothrop Stoddard on the questions: "Shall the Negro be encouraged to seek cultural equality? Has the Negro the same intellectual possibilities as other races?"
University of Massachusetts Amherst Libraries
…

The Chicago debate happened in this way: about a year and a half earlier, the magazine The Forum had asked Stoddard and Alain LeRoy Locke, the black writer, philosopher, and founding figure of the Harlem Renaissance, to write on the subject “Shall We Give the Negro Cultural Equality?” The magazine also asked the two to read their pieces live on the radio. But then Locke, recovering from an unhappy affair with Langston Hughes, went to Europe, and by September 23, 1927, the day of the broadcast, he had not returned.

Du Bois agreed to fill in. What he said on air, elaborating on what Locke had written, must have been good, because The Forum’s editor told him that the debate was “a corker,” and the consensus was that Du Bois had won. The Forum Council organizers then suggested holding the debate again, before a paying crowd.

Stoddard had to have known that the audience would be mostly black. Home-field advantage would be with Du Bois. Why did Stoddard agree? Like any author with books to sell, he probably thought he could use the publicity. (He had two new ones, “The Story of Youth" and “Luck: Your Silent Partner.”) Also, Stoddard probably believed that he could overawe any audience of blacks. He had denied being a member of the Ku Klux Klan but endorsed its tactics passionately in his books. And, in 1926, he gave a lecture before two thousand at Tuskegee University, in Alabama, informing them that the Nordic race was superior to nonwhites and that, for the good of all races, the world must continue to be governed by white supremacy. A black newspaper reported that the students “sat awestricken during the address, which terminated without any applause.”

Du Bois, a realist, wondered if Stoddard would show up. In letters to Fred Atkins Moore, the director of the Forum Council, Du Bois asked if they should line up an alternate. He suggested inviting an egregiously racist senator, like James Thomas Heflin, of Alabama: “He would be a scream and you would clean up if you could get hold of him.” But Stoddard made positive noises about his plans to be there. He and Du Bois agreed in advance on the topic. It was decided that Du Bois would speak first.

Tickets for the debate sold for fifty or seventy-five cents. The crowd numbered five thousand, four thousand, or three thousand, according to different counts. Du Bois, in a letter to his wife, Nina, said that hundreds could not get in. The Chicago Defender, the city’s leading black newspaper, ran a photo that showed a packed hall—floor seating, and a wraparound balcony—with an American-flag-draped stage. “It was a great occasion,” Du Bois wrote to Nina.