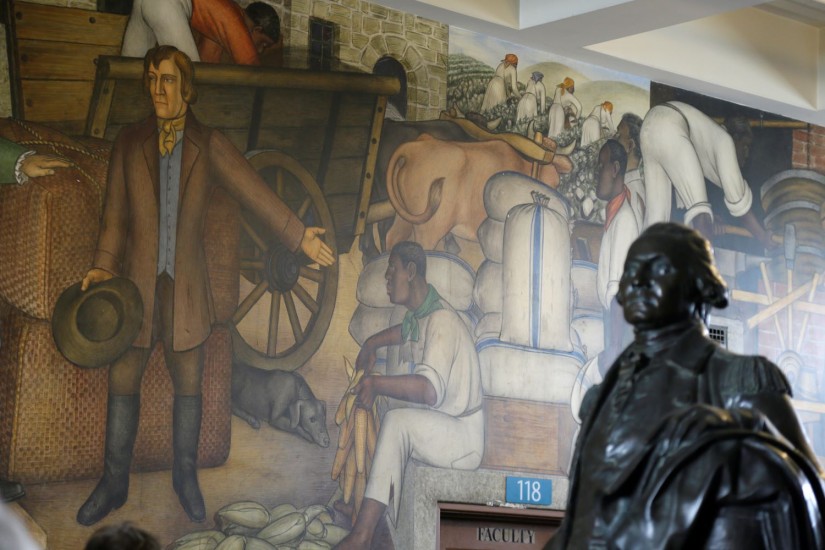 Panel of "Life of Washington" mural by Victor Arnautoff, depicting the sale of slaves to Washington (off screen left). A statue of Washington looms on the right.
Eric Risberg/AP Photo
…

So who are we, really? The answer rests on our interpretation of history and on how we determine the circle of “we.” When confronting the violence of contemporary white supremacists, the “we” is unambiguous, with the history of white supremacy firmly outside the circle. But in the liberal land of San Francisco, where a left-wing artist created a public work that links America’s white supremacist and democratic traditions, things are a bit more complicated.

On June 25, the San Francisco School Board voted to destroy Victor Arnautoff’s Depression-era mural series Life of Washington at George Washington High School because it was deemed racist and demeaning. Some students and educators—as well as school board officials, indigenous groups, and various black and Latinx leaders—have singled out two of the murals, which show enslaved Africans and a disturbing image of a dead Indian. The work’s critics argue not only that it depicts history from the colonizers’ perspective but also that such violent images are triggering. The school board’s decision provoked a national campaign in defense of Arnautoff’s work, with proponents citing First Amendment issues, the importance of historical memory, the failure to grasp the radical intent behind the mural series, and the absurdity of spending $600,000 that could have gone to fund arts education to destroy a work of art.
Related Article

After dozens of editorials, blog posts, petitions, and weeks of rancorous debate, the school board recently struck a compromise that would preserve and digitize the murals but also shroud them behind removable covers. This eminently reasonable solution, however, should not mark the end of what is potentially a fruitful debate over how we interpret the past, who has the authority to do so, and how liberal multiculturalism has shifted our response to historical violence and exploitation. Unfortunately, few on either side of this debate have taken stock of earlier contestations over the murals’ meaning, which bear little resemblance to the current controversy. Looking back at the long fight over Life of Washington exposes a gaping deficit in historical thinking—one that has infected contemporary political discourse and impoverished our capacity to think beyond spectacle.

Culture wars make for strange bedfellows. Conservative New York Times columnist Bari Weiss joined with progressives like Aijaz Ahmad, Wendy Brown, Judith Butler, Roxanne Dunbar-Ortiz, and Adolph Reed in defending Arnautoff’s work. The right sees the attack on Life of Washington as the latest skirmish in the left’s war on America and its symbols and traditions.