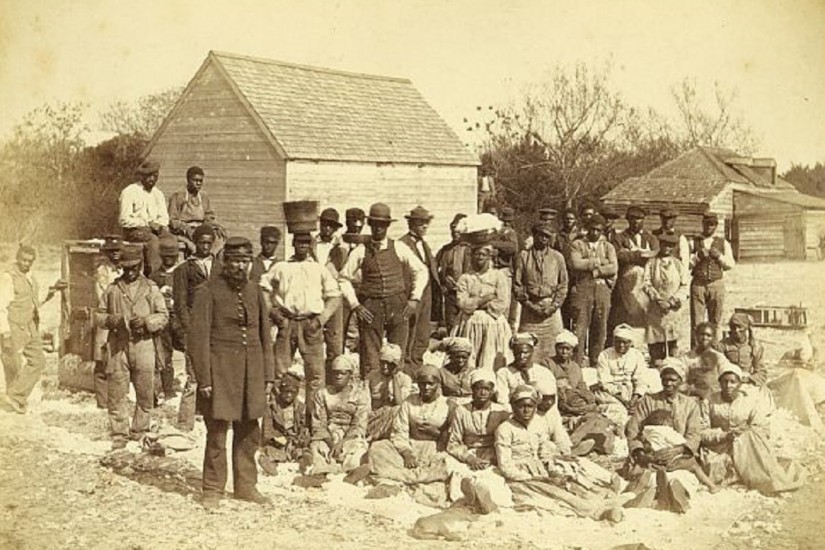 A picture captioned "Slaves of the rebel Genl. Thomas F. Drayton" shows a group of African American men and women on a South Carolina plantation, 1862.
Library of Congress
…

Spending money they earned after and between labor completed for their masters, enslaved consumers sought to provide material comfort to themselves and their kin, to differentiate themselves from their peers, and perhaps most importantly, to acquire material markers of freedom in a world that hemmed them in at every turn. Slaveholders wrestled with the implications of such behavior, sometimes outlawing slave spending outright, but more often looking to manipulate it to their own advantage. Buying goods in the Old South—a piece of peppermint candy, a silk cravat, a stolen watch, one’s own body—revealed the fragile politics at the heart of master-slave relation.

How did enslaved people earn money and what did they buy? The answers to these questions depend on where a person was enslaved and what kind of work she or he performed. In the rice-growing lowcountry of South Carolina and Georgia, enslaved men and women usually labored according to the “task system.” Under this scheme, planters or overseers assigned each laborer a daily task, hoeing a portion of field, for example, or pounding so many mortars of rice. Once a task was finished, that person’s labor was complete for the day. Make no mistake: this was taxing work in often stifling and deadly environments, but even so, some slaves were able to complete daily tasks early and earn time for themselves. Where allowed, some slaves grew crops of their own to supplement diets or to barter and truck. Others crafted brooms or baskets. Still others performed extra labor for their masters—often called overwork—or for other white people in the community, earning precious cash or credit for purchases of their choosing. In cotton and tobacco regions, enslaved people more often worked from sunup to sundown under the close eye of a driver or overseer. In many areas, however, it was customary for slaves to work Saturday afternoons and Sundays on their own time, devoting daylight hours to cash-earning activities similar to that of their lowcountry brethren.

What enslaved men and women did with that cash or credit—and what it meant—challenged the institution of slavery. In a world where masters doled out rudimentary food and raiment, enslaved people most often spent cash to augment allotments, introduce variety to clothing or diets, and, sometimes, to acquire goods or participate in activities otherwise banned. Provisioning, then, serves as a framework for understanding slave spending.