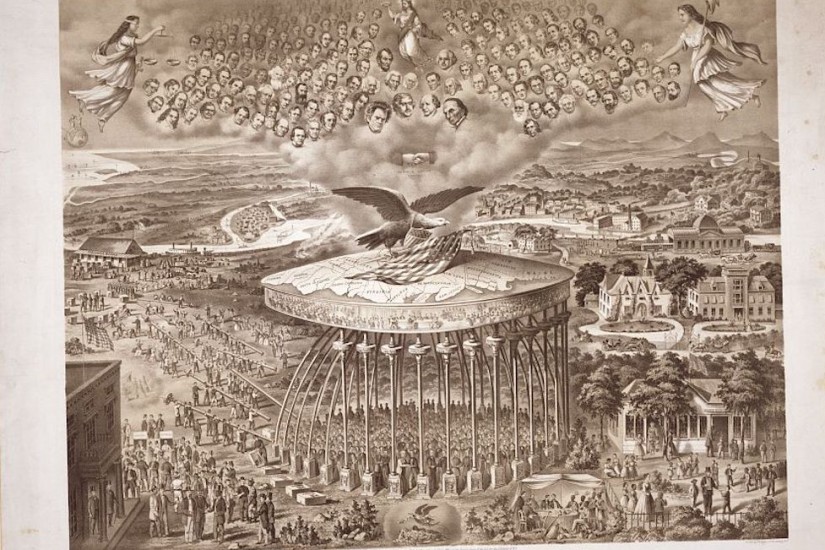 Horatio Bateman's 1867 print shows a grand allegory of the reconciliation of North and South through the federal program of Reconstruction.
Horatio Bateman/Library of Congress
…

You say early in the book that, in one sense, “Reconstruction never ended.” What exactly do you mean?

I defined Reconstruction in two ways. One, it’s a particular time period of American history. You can debate the dates. It starts in 1865, when the Civil War ends, or maybe it starts in 1863, when the Emancipation Proclamation is issued, and it ends sometime in the eighteen-seventies, although there’s debate about that also.

But, I think, more importantly, Reconstruction is a historical process. And the process is, How does the United States come to terms with the results of the Civil War? The unity of the nation we seem to have come to terms with. But the other matter is the destruction of slavery. How does the United States deal with the fact that four million people who were slaves became free? What role would they have? What rights would they have? How would they be treated? And those debates are still going on. Pick up today’s newspaper, and you’ll find things which relate back to the legacy of slavery. So in that sense, the reckoning has never happened, or we’re still grappling with the consequences of two hundred and fifty years of slavery.

Did you write this book because there was an area of Reconstruction you wanted to learn more about or teach people more about, or had things changed in your understanding of your previous scholarship?

Why does one choose to write a book in the first place? It may be some archival discovery, which was not really the case here. It may be the way debates are going on in the present. That did influence me. The issues central to the Fourteenth Amendment, the Fifteenth Amendment, the right to vote, are still part of our politics today. Who should vote? Who should be a citizen? What does equality before the law really mean? But, most important, and without trying to denigrate any other scholar, I lecture a lot about Reconstruction—I lecture in law schools, I lecture in history departments, I lecture to public audiences outside the academy—and I have found that there’s very little knowledge of why the Thirteenth, Fourteenth, and Fifteenth Amendments are important, or what they were trying to accomplish, even in law schools.

One of the things that I think needed to be corrected is that so much discussion of these amendments is based on just law-making places, like Congress and the Supreme Court. I’m not a lawyer, but I’m a historian. You’ve got to look at the whole society. Everybody was debating these questions during Reconstruction.