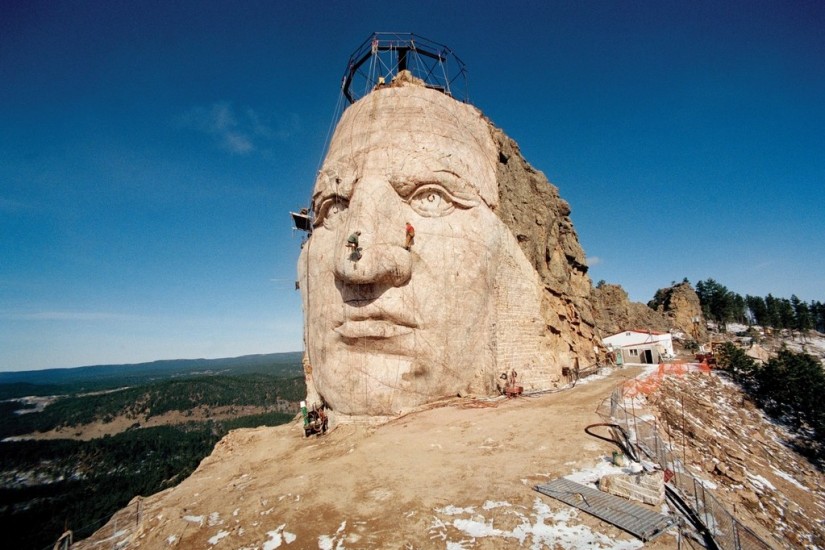 Every year, well over a million people visit the Crazy Horse Memorial, a name almost always followed, on brochures and signage, by the symbol ®. They pay an entrance fee (currently thirty dollars per car), plus a little extra for a short bus ride to the base of the mountain, where the photo opportunities are better, and a lot extra (a mandatory donation of a hundred and twenty-five dollars) to visit the top. They buy fry bread and buffalo meat in the restaurant, and T-shirts and rabbit furs and tepee-building kits and commemorative hard hats in the gift shop, and watch a twenty-two-minute orientation film in which members of the Lakota community praise the memorial and the Ziolkowski family. On special occasions—such as a combined commemoration of the Battle of the Little Bighorn and Ruth Ziolkowski’s birthday, in June—they can watch what are referred to as Night Blasts: long series of celebratory explosions on the mountain. They are handed brochures explaining that the money they spend at the memorial benefits Native American causes. “The purpose here—it’s a great purpose, it’s a noble purpose,” Jadwiga Ziolkowski, the fourth Ziolkowski child, now sixty-seven and one of the memorial’s C.E.O.s, told me. “It’s just a humanitarian project all the way around.”

There are many Lakota who praise the memorial. Charles (Bamm) Brewer, who organizes an annual tribute to Crazy Horse on the Pine Ridge Reservation, joked that his only problem with the carving is that “they didn’t make it big enough—he was a bigger man than that to our people!” I spoke with one Oglala who had named her son for Korczak, and others who had scattered family members’ ashes atop the carving. Some are grateful that the face offers an unmissable reminder of the frequently ignored Native history of the hills, and a counterpoint to the four white faces on Mt. Rushmore. “It’s the one large carving that they can’t tear down,” Amber Two Bulls, a twenty-six-year-old Lakota woman, told me.

But others argue that a mountain-size sculpture is a singularly ill-chosen tribute. When Crazy Horse was alive, he was known for his humility, which is considered a key virtue in Lakota culture. He never dressed elaborately or allowed his picture to be taken. (He is said to have responded, “Would you steal my shadow, too?”) Before he died, he asked his family to bury him in an unmarked grave.

There’s also the problem of the location. The Black Hills are known, in the Lakota language, as He Sapa or Paha Sapa—names that are sometimes translated as “the heart of everything that is.” A ninety-nine-year-old elder in the Sicongu Rosebud Sioux Tribe named Marie Brush Breaker-Randall told me that the mountains are “the foundation of the Lakota Nation.” In Lakota stories, people lived beneath them while the world was created. Nick Tilsen, an Oglala who runs an activism collective in Rapid City, told me that Crazy Horse was “a man who fought his entire life” to protect the Black Hills. “To literally blow up a mountain on these sacred lands feels like a massive insult to what he actually stood for,” he said. In 2001, the Lakota activist Russell Means likened the project to “carving up the mountain of Zion.” Charmaine White Face, a spokesperson for the Sioux Nation Treaty Council, called the memorial a disgrace. “Many, many of us, especially those of us who are more traditional, totally abhor it,” she told me. “It’s a sacrilege. It’s wrong.”