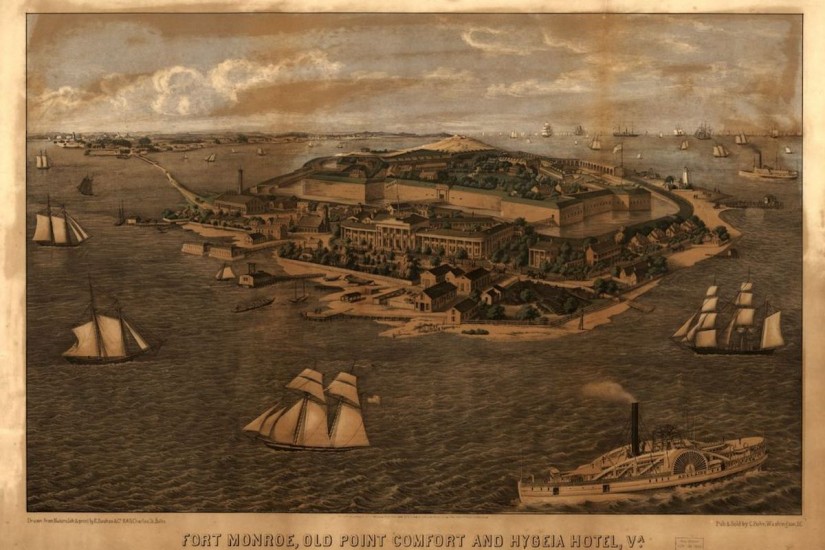 A 19th-century map depicting Fort Monroe, built on land once occupied by the Kikotan people.
E. Sachse & Co./Library of Congress
…

Commemorating the 400th anniversary of what the English colonizer John Rolfe described as the “20 and odd Negroes” (a number that was actually closer to 30) has dominated social media and the summer’s newscycle. But there’s an aspect of this commemorative activity that hasn’t received much attention. I refer specifically to the violence that occurred at Point Comfort less than a decade before the slave ship White Lion made anchor in August 1619. On that spot, a bloody event worthy of historical introspection took place: the massacre of the Kikotan Indians.That bloody event is important because it made it possible for the English to take Native lands and build Fort Henry and Fort Charles. The Kikotan massacre prepared the ground for the arrival of the first Africans in Virginia.

The history of English North America and what became the United States is a complex and often-violent story involving the enslavement of African peoples and the territorial dispossession and genocide of Native American communities. This is an uncomfortable history and neither the British nor Americans have fully reconciled itwith the contemporary economic, political, and social dimensions of their respective societies.

Most Americans don’t like to think about genocide as a foundational part of US history, while the English certainly don’t view their forebears as capable of perpetrating the mass killing of indigenous people. However, historian Jeffrey Ostler makes a compelling case for how genocide is woven into the fabric of North American history in his most recent book, Surviving Genocide. In Virginia, English colonization sparked dramatic population declines among Native American communities. While Virginia Indians numbered about 50,000 in 1607, by the early twentieth century, only a little over 2,000 remained.

But did the English initiate a genocide against Virginia’s Indian people? To answer this question it’s important to define genocide. The United Nations defined genocide in 1948 as “acts committed with intent to destroy, in whole or in part, a national, ethnical, racial or religious group.” Genocide can involve killing members of a group, causing “serious bodily or mental harm,” deliberately creating conditions designed to physically destroy a group “in whole or in part,” imposing measures that prevent births, and forcibly transferring children out of one group and to another.

This definition describes not only the “founding” of Virginia but the course of US history and its relationship to Native America. Importantly, the genocide of Virginia Indians didn’t occur within a discrete time period and under well-established bureaucratic conditions; genocide in Virginia unfolded slowly over a period of decades.