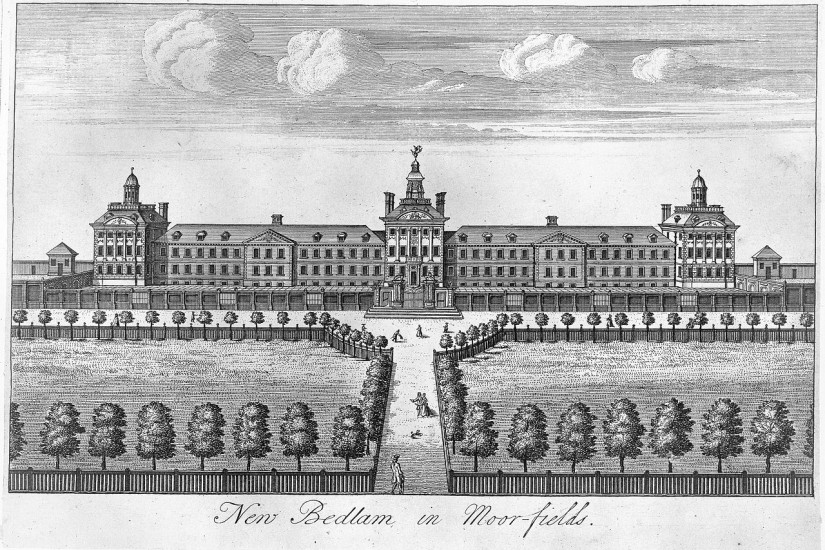 The Hospital of Bethlem [Bedlam] at Moorfields.
Wellcome Library/Wikimedia Commons
…

Since the 1980s, several states have reformed and repealed insanity defenses. Thirteen states allow “guilty but mentally ill” (GBMI) pleas for criminal charges. Kansas, Idaho, Montana, and Utah do not allow for an insanity plea to stand in as a defense to criminal charges. The repeal of the insanity plea in these states dates to a flurry of insanity defense reforms in the 1980s inspired by John Hinckley Jr.’s attempted assassination of Ronald Reagan in 1981. Public backlash to the insanity defense was swift when the court found Hinckley, who claimed he wanted to impress actress Jodie Foster, NGRI. Timed with this public condemnation was the reform of the insanity defense in several states’ legislatures in the years immediately following Hinckley’s trial. Soon after, a study on public opinion of Hinckley’s trial showed the extent to which medical professionals influenced the public’s reactions to the trial. The public’s increased trust in psychiatrists correlated with opinions that Hinckley’s sentence of institutionalization was fair. However, only 12.5% of participants were “very confident” in psychiatric testimony given in court; 87.1% still saw the insanity defense as a loophole to exploit.

Underlying the public’s negative response to Hinckley’s trial was the persistence of misconceptions surrounding the use of the insanity plea: that it is a means to escape punishment, that it is overused, and ultimately, that it is feigned. Such perceptions of the plea are no contemporary construction. Indeed, these attitudes have a history that stretches back to the early nineteenth century, when doctors began to assert their knowledge of the mind, and are an artifact of the public’s wariness of medical expertise. Shifting perceptions of the plea, then, can be mined for what they reveal about the public’s persistent power to shape legal practice.

By the early 1800s, American doctors increasingly viewed disease, instead of deviance, as a primary cause of abnormal behavior. At the same time, questions concerning the perceptions of the mentally ill within the judicial system presented themselves in popular print sources. “It is a matter of importance as well as of singular interest to investigate the sources from whence the popular feeling and intelligence concerning madness have been derived” noted one doctor in the Boston Medical Intelligencer in 1824. Of course, these perceptions were a foremost concern to doctors when any defendant would face a jury of their male peers. Juries now incorporated their perceptions of experts into their judgments of both insane men and women in the courts.