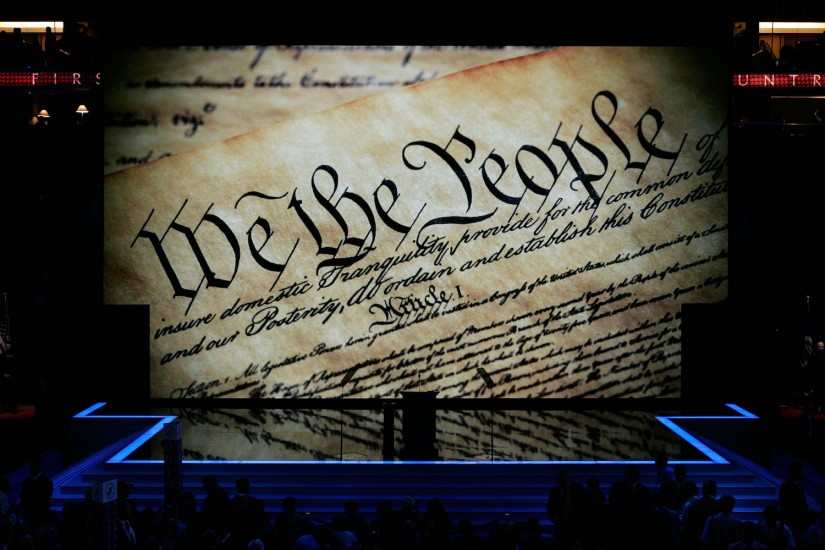 The U.S. constitution displayed on a screen at the Republican National Convention (2008).
Alex Wong/Getty Images

It’s become an article of faith on the left that America was founded by racists who wrote the Constitution in part to preserve slavery. Historian David Waldstreicher calls it “a proslavery constitution, in intention and effect.” Yale law professor Akhil Amar labels the Constitution “pro-slavery.” Author Ibram Kendi claims that the Framers “embraced Black inferiority” and “enshrined the power of slaveholders and racist ideas in the nation’s founding document.” And the New York Times’ “1619 Project” purports to “reframe” American history by positing not only that the United States was founded “as a slavocracy” but that “nearly everything that has truly made America exceptional” is the result of “slavery — and the anti-black racism it required.”

There’s nothing new about these assertions. The idea that America is premised on white supremacy has been a commonplace of political debate ever since it was proffered by pro-slavery intellectuals in the 1830s. What’s astonishing is the degree to which it has been adopted by today’s progressives. In his 1857 Dred Scott ruling, Chief Justice Roger Taney claimed that when the Founding Fathers said “all men are created equal,” they really meant only white men. Today, many left-wing journalists, lawyers, politicians, and academics would hasten to agree.

But the reality is more complex and, in some ways, more ennobling. Far from being a given at the time, the constitutional status of slavery was the subject of intense dispute in the decades before the Civil War. One side of that debate argued with much plausibility that slavery was already unconstitutional, decades before adoption of the 13th, 14th, and 15th Amendments.

Those amendments represented the vindication of the views of pro-Constitution abolitionists who sought to defend what they saw as a “glorious liberty document” against the pro-slavery spin that southern intellectuals were putting on it — and who, after the war, revised the nation’s fundamental law to erase those anti-freedom misinterpretations. Yet their legacy is often ignored in discussions of slavery today. Many scholars, including those who claim to deplore everything associated with slavery and its effects, treat anti-slavery constitutionalism either as a fringe movement or as an honorable but duplicitous effort to weasel out of what they see as the Constitution’s obviously pro-slavery terms.

This is unjust, and it gives a distorted picture of the legal history of slavery. Abolitionist constitutional thought was a vibrant movement in the pre–Civil War era. To one degree or other, it was endorsed by such luminaries as John Quincy Adams, Abraham Lincoln, Charles Sumner, Chief Justice Salmon Chase, and Frederick Douglass. And it left its lasting mark on the Constitution, in the form of the Reconstruction amendments that remain the law today. Many scholars now blithely dismiss it, seeming to prefer the more radical position espoused by the anarchist William Lloyd Garrison (1805–1879), who denounced the Constitution for protecting slavery and insisted that the Union be dissolved in order to eradicate it. Garrison, however, was in the minority among slavery’s opponents, and for all his eloquence and passion, he achieved remarkably little. More respected at the time, and more effective in actually destroying slavery, were the pro-Constitution abolitionists who advanced both political and legal arguments instrumental to the institution’s demise.