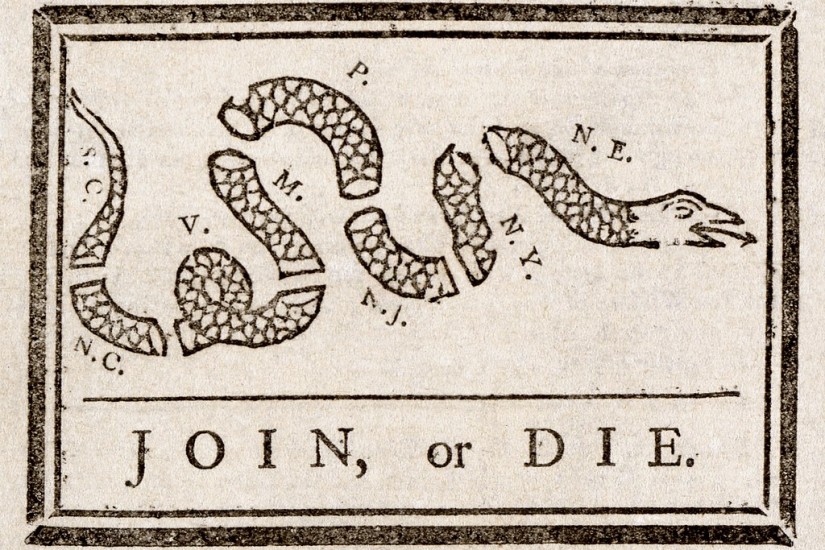 A political cartoon that was used during both the French and Indian War and the American Revolution (1754).
Wikimedia Commons
…

Old Testament stories about the punishments visited on the Jews when they failed to heed the Lord’s admonitions complemented examples of betrayal and heroism encountered in secular histories. As David Ramsay explained in 1789, the revolutionaries closely studied the Old Testament. Here, they learned that the Jews had made a terrible mistake when they appealed to the Lord for a king. As Americans interpreted biblical lessons, “even the name of a king was rendered odious” and “Hereditary succession was turned into ridicule.”

These popular ideas helped turn complaints about taxes and representation into armed resistance against Great Britain. That is a key distinction. We are exploring the fundamentals for revolutionary mobilization, retrieving explanations for personal sacrifice. The central element in justifying violence was the deeply personal conviction that if one did not take an active stand against tyranny, one thereby offended God. Accepting despotism was not simply an act of cowardice; it was sin. This religiously driven sense of political responsibility was not the perspective of the Founders, students of the Enlightenment. But in the larger revolutionary society a scriptural message resonated persuasively with the American soldiers and with the communities that sent them to war.

As respected members of small communities, ministers provided guidance in spiritual matters. They also spoke to parishioners about political concerns. Did God condone rebellion? What did the Bible say about neutrality in the fight against oppression? Should one forgive an enemy who has inflicted pain on the community? Unless we grasp the revolutionary challenge as congregations throughout America would have interpreted them, we will fail to understand why these revolutionaries took oaths on the Bible so seriously or why they frequently offered domestic political enemies a chance of redemption and reconciliation through public confession.

Restoring the voices of ordinary people to the story of the Revolution requires an additional element. After all, abstract and highly intellectual­ized ideas about public virtue and vigilance—sometimes seen as the driving force of revolution—were not sufficient to trigger or sustain resis­tance. Something more was needed, an additional catalyst. Revolutions require passion.

What we often forget—although any contemporary news report about insurgencies throughout the world would clarify our histor­ical understanding—is that during our own revolution assumptions and beliefs about the exercise of political power were amplified by raw emotions such as anger and hate. Accepting the emotional base of revolutionary re­sistance does not lessen the achievements of the founding generation. To the contrary, it makes them more human. As the Reverend Henry Cum­ings explained in a sermon delivered in Lexington, Massachusetts—to a congregation that included families who had recently lost sons and fathers in the battle of April 19, 1775—“Though rage, and inflamed wrath, are no essential properties of patriotism; yet patriotism, without feeling or sensibility, is a mere name.”

By restoring passions to the narrative of the Revolution, we gain a strikingly different perspective on the origins of American political cul­ture. Instead of an event­-driven story, one that sweeps us smoothly along from the Stamp Act crisis of 1765 to the Declaration of Independence and to the peace treaty of 1783, we will recover shifting emotional environments that were characterized in turns by a sense of rejection, a search for assur­ance, a climate of fear, a demand for revolutionary justice, a discovery of betrayal, a desire for revenge, and finally, an acceptance of reconciliation.