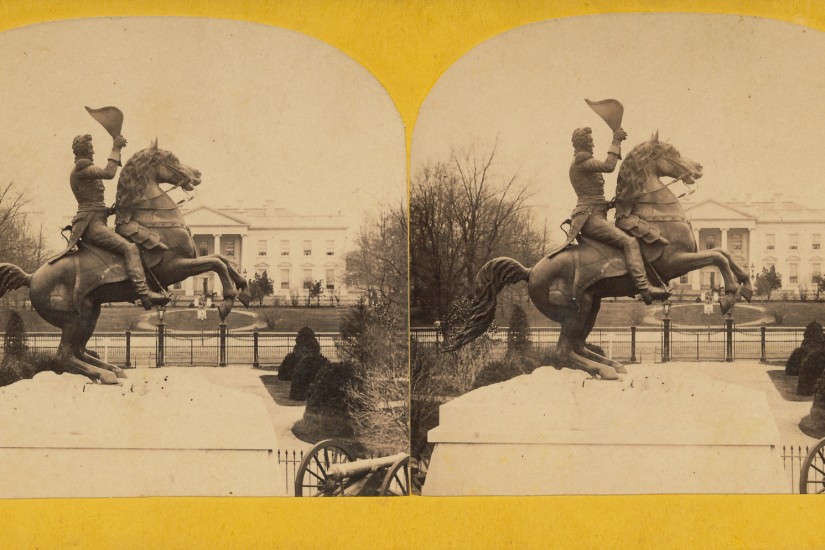 The statue of Andrew Jackson at the Battle of New Orleans, located in Lafayette Square.
Streets of Washington
…

So how revealing are comparisons between Andrew Jackson and Donald Trump? The answer is: symbolically, quite a bit.

Jackson was the first president to claim the mantle of democracy as the electorate expanded in the early nineteenth century to include virtually all adult white men. And he was the first to play the flip side of this coin in 1824 when he famously claimed that only a corrupt bargain of his opponents had thwarted the democratic will of the people and denied him electoral victory. Relatively few American presidents have made such claims before or since. In 2016 both the victor, Trump, and the loser, Clinton, did.

In the minds of Jackson’s admirers, Jackson’s thirst for glory and vengeance had secured a greater good. It is a rationale familiar to us today.

Jackson, too, first successfully took on the role of tribune of the people fighting the corrupt and entrenched interests. The claim might have been, as Opal believes, false, but it was still effective. That garment has since become quite worn, but it would have been a miracle if Trump, like Roosevelt, had not donned it. Jackson was the first president to recognize the gift his enemies gave him when they hated him so extravagantly. It became a means to entrench his own support. Roosevelt and Trump have rejoiced in their enemies. What Opal adds to this symbolic repertoire is Jackson’s embrace of vengeance: the president as the strong and ruthless avenging arm of the innocent republic.