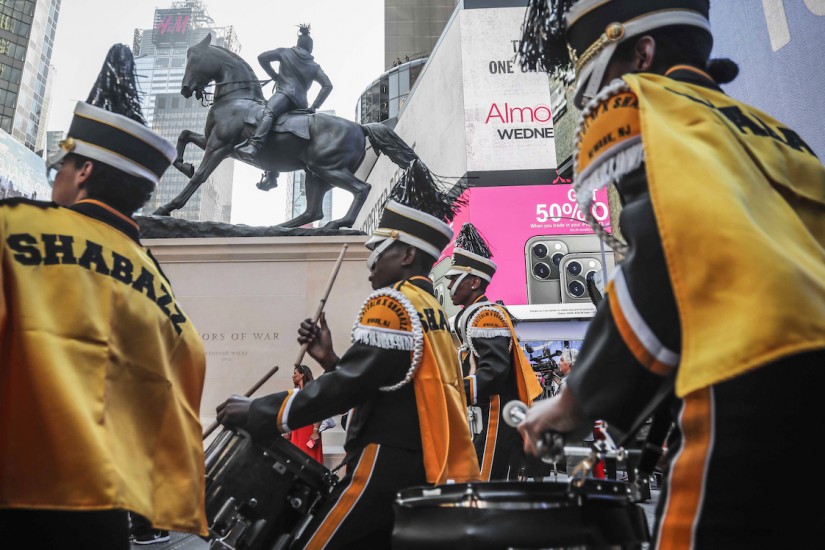 Members of the Malcom Shabazz High School marching band, from Newark, N.J., perform at the the Times Square unveiling of Kehinde Wiley's sculpture "Rumors of War," Sept. 27, 2019.
Bebeto Matthews/AP Photo
The old-fashioned, ceremonial unveiling of a statue is mostly extinct as a cultural spectacle. New art works are generally introduced quietly, amid white wine, canapés and polite chatter at exhibition openings. Now and then, perhaps a new museum may open with a ribbon-cutting. But Kehinde Wiley, the man who painted the portrait of Barack Obama that now hangs in the National Portrait Gallery, tried to reinvent the unveiling Friday afternoon in Times Square, complete with a brass band, gawking crowds, speeches by a phalanx of political notables and, finally, a few tugs on a shimmery silver cloth draped over his latest work, a monumentally scaled bronze equestrian statue.
It all went mostly according to plan. Passersby stopped to look, registering the oddity of the event in their “only in New York” mental file, and around 2:40 p.m., the cloth fell off, revealing a horse with one leg raised and its tail extended as if caught by a sudden upswelling of wind. On its back, framed against the digital image of a woman in a lacy bra and panties on the American Eagle Outfitters billboard (“Pow when you want it”), sat a young African American man wearing Nike shoes and short dreadlocks gathered in a knot atop his head. Like the figure in the statue on which Wiley’s work is based — a memorial to the Confederate general J.E.B. Stuart — the rider looks over his shoulder, as if about to turn and reengage with a battle raging behind him.

The sculpture, titled “Rumors of War,” will stay in New York until December, when it will be transported to Richmond. There it will stand permanently in front of the Virginia Museum of Fine Arts, which commissioned the work, only a few blocks from the city’s great public art shame — the collection of Confederate generals memorialized on Monument Avenue.

Friday’s event is the second major unveiling in less than two years for Wiley, who shared the stage with artist Amy Sherald for the official reveal of the Obamas’ portraits in February 2018. Wiley was already among the most famous artists working even before he became Barack Obama’s chosen portraitist. But he reportedly enjoyed the pomp and ceremony of the Washington event so much that he wanted to reproduce it for the debut of what is being billed as his largest public work of art.
…
View on Washington Post
View Connections