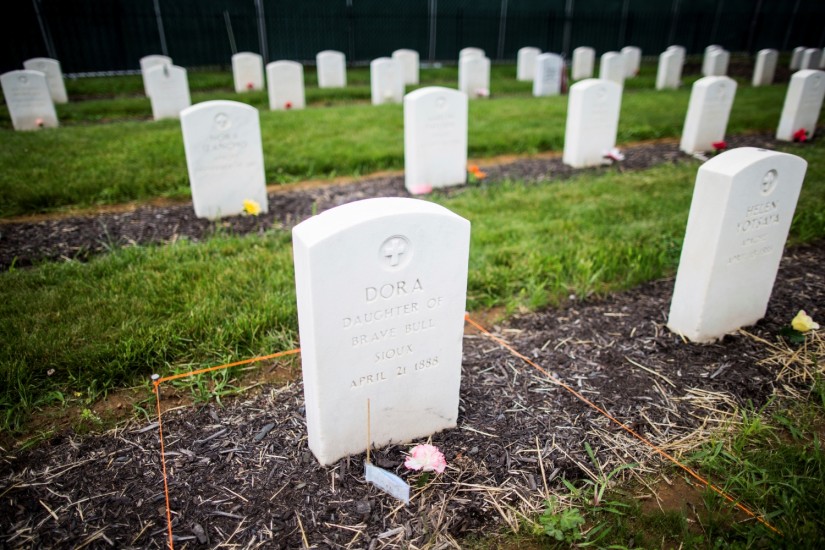 Headstones at what used to be the site of Carlisle Indian School, 2018.
Sean Simmers/AP Images
…

Carlisle, and boarding schools like it, are remembered as a dark chapter in the history of the ill-conceived assimilation policies designed to strip Native people of their cultures and languages by indoctrinating them with U.S. patriotism. But child removal is a longstanding practice, ultimately created to take away Native land. Although Carlisle is located in the East, it played a key role in pressuring the West’s most intransigent tribes to cede and sell land by taking their children hostage.

A century after its closing, however, unanswered questions surround the Carlisle Indian School’s brutal legacy. Secrets once thought buried — why did so many children die there? — are coming to light. And the descendants of those interred are demanding more than just the return of their stolen ancestors.

“The past of Carlisle is really about justice,” says Ben Rhodd, the Rosebud Sioux Tribe’s tribal historic preservation officer. Since April 2016, his office has been pursuing the return of 11 children buried at the Carlisle Indian Cemetery. Even in death, Rhodd explains, Rosebud’s children remain “prisoners of war,” held at a military base and unable to return to their home on the Rosebud Reservation, children who were “hostages taken to pacify the leadership of tribes that would dare stand against U.S. expansion and Manifest Destiny.”

Rosebud is not alone in seeking justice for its young ancestors. The Northern Arapaho reclaimed its first children in 2017, and other tribes have followed suit. Since 2013, the National Congress of American Indians has requested all federal records for the hundreds of Native children who have disappeared or died while attending one of the hundreds of federally run or funded boarding schools. So far, there has been little response from federal officials, who say the requests are nearly impossible to fulfill. “A lot of students end up disappearing in the archival record,” says Preston McBride, a graduate student who has researched the case for the Native American Boarding School Healing Coalition and written about disease and student deaths at Carlisle. McBride calls this phenomenon “administrative disappearance,” in which “even tribes don’t have the records.”