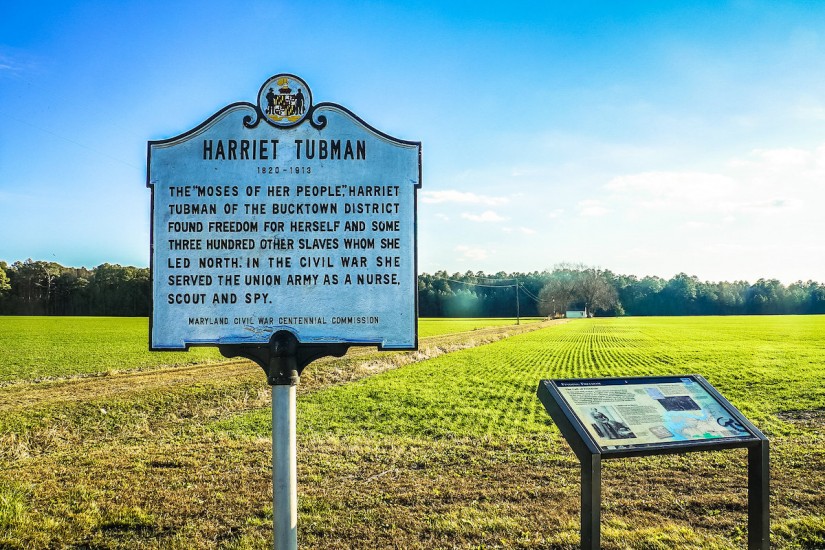 A historical marker on the side of the Harriet Tubman Underground Railroad Byway in Maryland. Many of the lesser-known sites associated with Tubman are quickly disappearing due to the effects of climate change.
Ted Eytan/Flickr.com

... national parks established in her honor, several biographies about her feats, and a major motion picture about to be released about her life. But time has not been as kind to the lands that Tubman left behind, or the descendants of the first free African-American communities that called them home.

... national parks established in her honor, several biographies about her feats, and a major motion picture about to be released about her life. But time has not been as kind to the lands that Tubman left behind, or the descendants of the first free African-American communities that called them home.

The Chesapeake Bay and the rivers that feed it are rising, along with most of the rest of the world’s bodies of water, encroaching on the now-marshy expanses where Tubman lived and worked alongside her father, Benjamin Ross, a gifted woodsman. The land is subsiding, too, as farmers withdraw water to irrigate crops and communities reach ever deeper into the aquifers for clean drinking water. Graves, some unmarked, are collapsing, hidden in woods next to forlorn houses of worship. Ghost forests dot the landscape, once-lush loblolly pines reduced to mere skinny sticks; timbering thinned the forests, and saltwater intrusion is trying to finish the leveling.

The loss of these lands will make it much harder for future generations to understand Tubman’s story and how the community of freed and enslaved peoples networked and relied on each other to free themselves from bondage. That Maryland — and the rest of the nation — might be willing to lose these places speaks volumes about how governments and preservationists view the first lands that African-Americans were able to call their own.

At Olivewood Cemetery in Houston, now a UNESCO heritage site, the graves of former slaves and freed people who built the city’s black middle class are being swallowed by flooding from frequent storms. On Edisto Island, S.C., one of the original freedmen’s cottages, Hutchinson House, was abandoned and deteriorated for decades and is only now being restored to educate visitors about Gullah-Geechee culture. But it may be too late; a recent report from the Union of Concerned Scientists indicates that 57 percent of the island could be underwater by 2100. Princeville, N.C., is the oldest town in the United States to be founded by African-Americans. The town was built on low ground, and it has had to fend off flooding from the Tar River many times.

These examples, and many more, showcase America’s racialized topographies, a term that geography professors Jeff Ueland and Barney Warf used in 2006 to describe the manner in which race correlates to altitude. In their review of 146 Southern cities, the geographers found that Black residents disproportionately settled in low-lying areas while majority white communities took to higher elevations. That happened because when the Civil War ended, whites got to choose first, said Kofi Boone, a professor of landscape architecture at North Carolina State University.

“Land was available, but it was literally available land, and dependent on the willingness of the white owner to sell it,” he said. “There were a few exceptions where that available land was high ground, but not many.”

Sea level rise, climate change, and sinking lands are certainly hastening the demise of these important touchstones that were on lower land to begin with.

Along the Harriet Tubman Underground Railroad Byway, a 125-mile driving tour that state tourism and federal highway officials helped establish years ago to complement the national park that opened in 2017, important touchstones of Tubman’s life are deteriorating. Malone’s Church, a ...