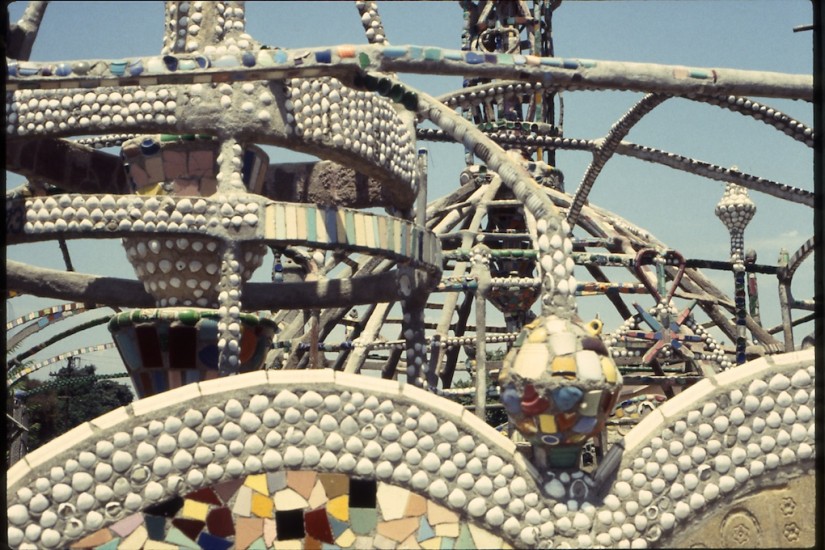 Sabato Rodia was a beachcomber. Barely five feet tall, with a face as creased as a used map and eyes perpetually squinted against the sun, he spent untold days prowling the beaches and estuaries of Southern California with an old cement sack slung over his shoulder. As he walked, he filled the sack with the shells that marine mollusks had once built from seawater to protect their vulnerable bodies.

In a way, the seashells also shielded Rodia from the blows of a difficult life. When he was 14, Rodia’s family had sent him from Italy to the United States to earn a living as a coal miner and construction worker. Labor conditions in turn-of-the-century America were crushing though, and after Rodia’s brother died in a mining accident, he buckled under their weight. He drank too much and beat his wife Lucia, then left her and their children. By the 1920s, Rodia was living alone on land he’d bought for US $900 in Los Angeles’ Watts neighborhood, barely literate and working as a tile setter.

That’s when he turned to the sea for salvation. Over the next three decades, Rodia hauled some 10,000 seashells from the coast to his property, where he built a whimsical fantasy of concrete walls, arches, and towers that soared to over 30 meters. He studded the structure with the shells, as well as with broken tools, plastic toys, glass bottles, pieces of tile, and thousands of other found objects. The obsession helped him stay sober. “I was one of the bad men,” he once said. “I was drunken, all the time a drinkin’. … That’s why I built the tower for, I quit the drinkin’.”

Nuestro Pueblo—Our Town, as Rodia called his creation—drew in the neighborhood’s working class immigrants. Some held weddings and baptized their children within its lacy walls. Then, in 1954, Rodia abruptly handed his keys to a friend, left Watts, and never returned, even when Los Angeles threatened to demolish his “pile of junk” three years later.

In Rodia’s absence, Watts rose to defend its orphaned landmark. Residents convinced officials that if a crane could pull on the towers with 4,500 kilograms of force without toppling them, they should stay. The towers stood. Today, visitors from around the world flock to the Watts Towers, and the city that sought their demolition has sunk millions of dollars into their upkeep. Scholars look to them for insights on class politics, the Italian-American diaspora, and art history. But until recently, few people paid attention to the towers’ seashells.

So Bruno Pernet, a marine biologist at California State University, Long Beach, decided to look at Rodia’s history through the mollusks he collected. After several years of identifying clams, abalone, and other shells, Pernet and his colleagues realized that they not only corroborated scattered ...