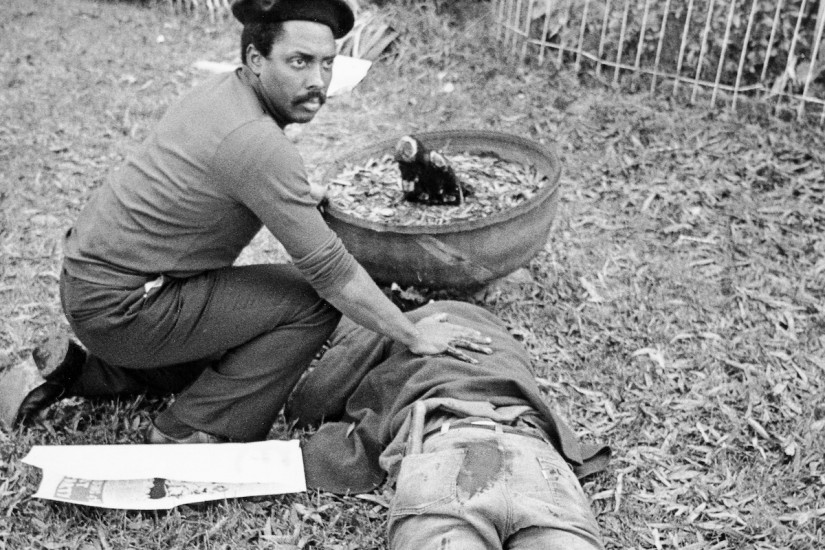 A man kneels by one of the five victims of the 1979 Greensboro Massacre in Greensboro, N.C during which KKK members fired upon a crowd of labor organizers.
Jim Stratford/AP Images

... the forthcoming collaborative autobiography I am writing with her (As Goes the South: The Life and Lessons of Roz Pelles), Pelles describes her work as a CWP member and organizer in textile mills and the lead up to the Greensboro Massacre, and she offers lessons for movement building today.

... the forthcoming collaborative autobiography I am writing with her (As Goes the South: The Life and Lessons of Roz Pelles), Pelles describes her work as a CWP member and organizer in textile mills and the lead up to the Greensboro Massacre, and she offers lessons for movement building today.

JORDAN CAMP: Before the Greensboro Massacre, you and your colleagues had been organizing within unions in North Carolina. What were some of the challenges you faced there?

ROSALYN PELLES: In North Carolina, the Communist Workers Party (CWP) was organizing primarily in textile mills and hospitals. After several years of organizing in places such as Cone Mills, Burlington Industries, and Duke Hospital, the party was seeing significant success in our efforts. Many of our comrades were becoming leaders in their unions, changing the direction of company-dominated unions, and leading important struggles in their workplaces, including strikes.

We faced many challenges when we started this work. In many instances, we were going against tradition and accepted practices. We were organizing across racial lines, bringing black and white workers together. In many places this was unheard of. This separation of workers for the companies was the main way they were able to control the workers and keep both black workers and white workers from making demands on the companies for safe working conditions, better pay, and adequate health care.

We were open in our analysis of why workers were poor and had to work in plants and also farm once they got home or work two or more jobs to support their families to make ends meet. We made it clear the it was not them but the system of capitalism that was the problem. This understanding ran counter to what they had been told for years. And, in fact, spreading fear about communists and outside agitators was another way workers were frightened and separated. Every day in plants, hospitals, and communities, we learned that these challenges could be overcome as long as we continued to do our organizing work, told the truth, listened to and learned from folks as they shared their own experiences, and trained and promoted the leadership of the folks we were organizing with.

JC: What kind of organizing were you doing to confront the KKK before the march on November 3, 1979, and what motivated you to engage in these struggles?

RP: We were not organizing to confront the KKK. We were organizing against racism, racist violence, and the work of the KKK that caused divisions among the working class. In 1978 and 1979, the KKK and white supremacy were on the rise in North Carolina. The KKK and racists were bold and visible trying to organize white folks using hatred and fear. In some places, this was working. We saw organizing against the Klan as critical to our work to bring together folks across lines of racial division.

In the late 1970s, the country politically was very similar to what we are experiencing today. White supremacy, hatred, and “othering” were being promoted. Racist violence was on the rise. Scapegoating was being used to provide false answers to the problems people were facing. The country was hearing rumors of the coming of an economic downturn. And racism was being promoted by people holding and seeking political office—Ronald Reagan was running for president at the time, and a central part of his campaign was upholding “states’ rights” and the use of other code words meant to separate folks along racial lines. In fact, in 1980, Reagan would do a campaign event in Nashoba County, less than ten miles from where civil rights workers James Chaney, Andrew Goodman, and Michael Schwerner were murdered by the KKK in 1964.

During the summer of 1979, North Carolina’s KKK had a huge organizing and recruitment event in China Grove where they showed The Birth of a Nation. We were organizing in that community and joined with local activists in a protest against the event. Our protest was met by armed KKK members and ...