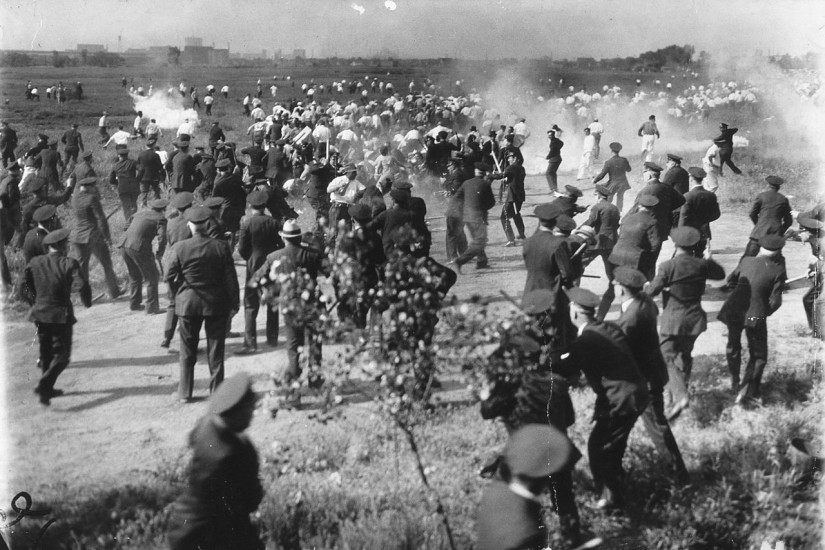 The Memorial Day Massacre of 1937.
National Archives and Records Administration
…

And so it was that 1,500 people marched on Republic’s plant in Chicago, armed with signs declaring their right to protest, affirming their support for Roosevelt and the New Deal, and denouncing Republic and the other Little Steel companies. Their hope was to set up a mass picket line at the plant and draw out the thousand or so men who remained at work inside.

Unfortunately for these marchers, whose ranks included over one hundred women and a fair number of children, workers’ lives didn’t matter very much for corporations and the government. In the Depression era alone, several hundred workers had already been killed in clashes with police, National Guardsmen, and company guards, who numbered in the hundreds at companies like Republic, Ford Motor, and Phelps Dodge.

Occasionally, police and guardsmen were also killed or injured, along with loyal employees. But mainly, the victims of “labor trouble” were striking unionists. The people who killed them were almost never prosecuted, even though it was commonplace for the workers themselves to face criminal charges for the violence that was inflicted on them.

Some of the details of what happened that Sunday are still uncertain. But this much is clear: The marchers were met near the plant gate by 250 members of the Chicago Police, who had been fed, housed, and armed by Republic. They stopped the marchers, cursed and threatened them, and ordered them to disperse.

And then, with no real provocation, the police suddenly opened fire on the crowd.