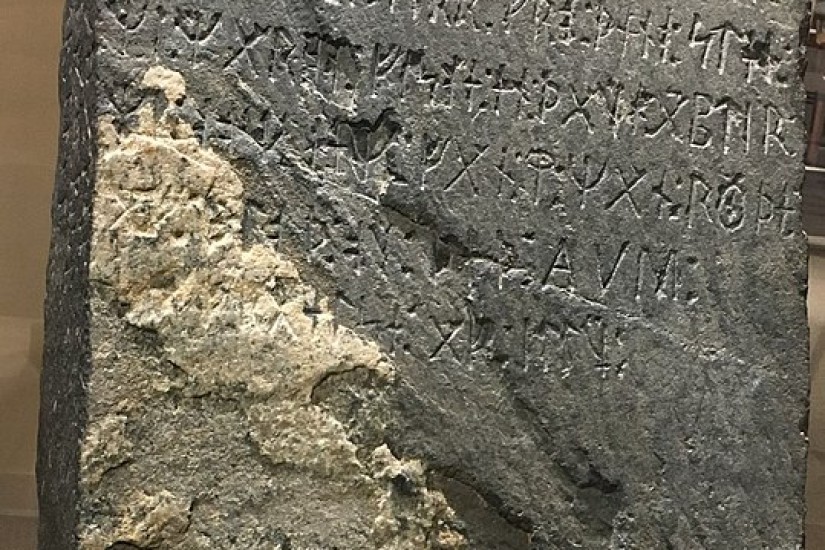 The Kensington Runestone on display in the Runestone Musuem in Alexandria, MN (2018).
Mauricio Valle/Wikimedia Commons

Two hours west of Minnesota’s Twin Cities on Interstate 94, a twenty-eight-foot statue of a Norseman stands in the heart of the midsize resort town of Alexandria. Known as “Big Ole,” the towering Viking brandishes a shield that boldly proclaims the town “The Birthplace of America.” People pose in front of the mammoth man for photographs. When I attended high school in Alexandria, we even took our prom pictures in front of him (ironically, of course). The predominantly white population of Alexandria generally accepts Big Ole as a harmless feature of the town, one of many such kitschy fiberglass statues across the state and region. But Big Ole does not stand as an immutable, permanent feature of the landscape. Instead, he is a cultural artifact created to promote an imagined white past, financially and literally propped up into the present day.

Big Ole’s origin story begins with the Kensington Runestone, an inscribed rock discovered by Swedish farmer Olof Ohman near Alexandria in 1898. Some argue—and many others dispute—that the Runestone is evidence of a visit by Vikings to what is currently west-central Minnesota in the year 1362, well before Christopher Columbus or other Europeans arrived in the New World. In addition to offering a competing origin story of a European America, the alleged documentation of early Norse presence in the Midwest served to validate nineteenth-century Scandinavian settlement of Indigenous land—specifically, the homelands of the Dakota.

What is currently called Alexandria has been part of the Dakota for hundreds of years. Euro-American settlers first arrived in 1858, just seven years after a series of manipulative treaties forced the Dakota out of the area onto reservations along the Minnesota River. When Indigenous resistance erupted in the U.S.-Dakota War of 1862, white settlers quickly fled the area. In the aftermath of the conflict, the United States interned hundreds of Dakota men, women, and children and executed thirty-eight Dakota men in the largest mass hanging in United States history.

Meanwhile, the state of Minnesota established Fort Alexandria as a military outpost to help revive and protect white settlement. The ensuing influx of European immigrants included waves of Scandinavian people arriving in the 1880s and 1890s—Olof Ohman among them. When he apparently discovered a Runestone in 1898 suggesting Scandinavian presence in the area dating to the fourteenth century, it helped justify immigrant settlement on stolen Dakota land.

The stone almost faded into obscurity in the early twentieth century after scholars in the United States and Scandinavia dismissed the stone as a hoax. In the years following World War II, however, the Runestone enjoyed a resurgence in popularity, in part because second- and third-generation Scandinavians were eager to defend the honesty of Ohman—and, by extension, the legacy of their ancestors. Embracing a Scandinavian origin story took on additional significance in an era when the category of “white” firmly included most European ethnic groups, often in opposition to African Americans and other people of color.

Asserting a Scandinavian history in the 1940s and 1950s meant affirming a white past and an associated sense of legitimacy. In 1948, the curator of archeology at the Smithsonian Institution examined the Runestone and determined that it was “carved by white-men who traveled far into North America ...