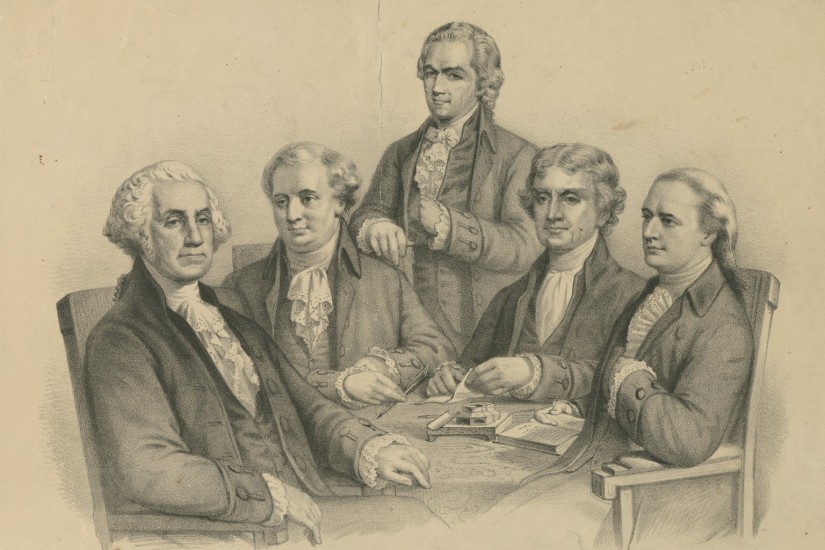 ... in age— Jefferson was 47 and Hamilton 35 in 1790—they could not have been more different in temperament. Hamilton was outgoing and outspoken; he dominated every room. Jefferson, amiable and erudite, was quiet and reserved. Deep philosophical differences, though, soon set them against each other.

... in age— Jefferson was 47 and Hamilton 35 in 1790—they could not have been more different in temperament. Hamilton was outgoing and outspoken; he dominated every room. Jefferson, amiable and erudite, was quiet and reserved. Deep philosophical differences, though, soon set them against each other.

In Jefferson’s view, centralized government was simply European-style tyranny waiting to happen again. Informed by his upbringing in agrarian Virginia, he dreamed of a society of property-owning farmers who controlled their destiny. While a manufacturing economy was driven by avarice, a republic resting on the yeoman farmer would keep “alive that sacred fire” of personal liberty and virtue.

Hamilton, of course, had risen meteorically in the world of urban commerce. Naturally, he believed that a flourishing merchant economy would sow opportunities for all. Further, it would produce a philanthropic, knowledgeable and enterprising people. Jefferson once equated cities with “great sores,” but in Hamilton’s eyes they were focal points of societal health, providing a foundation for wealth creation, consumerism, the arts, innovation and enlightenment. A clash between the two Founding Fathers was inevitable.

The economic program instituted by the Treasury secretary triggered Jefferson’s suspicions, but it wasn’t until he learned what Hamilton had preached at the Constitutional Convention that he put together the whole puzzle. He saw as dangerous Hamilton’s push to strengthen the central government and presidency. And he detected an intent to secure the sway of the “financial interest” over Congress and foster the growth of a new moneyed class. All of it would menace republicanism and the agrarian way of life. Jefferson was sure that before long, Hamiltonianism would produce in America the same evil cause-and-effects he had witnessed in Europe: monarchy and rigid social stratification leading to massive poverty and widespread urban squalor.

He responded by organizing the Republican Party. Jefferson also hired Philip Freneau, a gifted writer with a penchant for satire, to run an opposition newspaper, the National Gazette. And he denounced Hamilton to Washington, reporting that his rival had praised Britain’s government while calling the Constitution a “shilly shally thing” destined to be replaced by something better. Hamilton, Jefferson warned, secretly schemed to restore monarchy in America. Already, a “corrupt squadron” of Hamiltonians within Congress was engaged in financial speculation, disdaining constitutional limits on government’s power. Washington, though, was unmoved; he believed in his former aide and the economic path he had set, one that would leave the country “prosperous & happy.”

Hamilton countered Jefferson’s attacks by establishing his own party, the Federalists. He denied plotting an American monarchy, saying that only a “madman” would attempt such a thing, and suggested to Washington that Jefferson was the one with designs—to be president and eradicate the current economic program. It was Jefferson too, driven by “violent passions” and an “unsound & dangerous” philosophy, who wanted to displace the Constitution.

But even as the pair fought relentlessly, they agreed on two issues. When Washington spoke of retiring after one term, both men beseeched him to continue. And when the French Revolution led to a broader European war, the two were of one mind in thinking America must remain neutral. In 1793, though, Britain was lured into the overseas conflict, arousing passions in the States that domestic issues “could never excite,” as Jefferson remarked. Hamilton, who understood trade with England to be crucial to the nation’s economy, counseled support of Britain. In Jefferson’s opinion, Hamilton was “panick struck” by the pro-French sentiment that prevailed in America. He, in turn, was invigorated by the support, seeing it as a sign that “the old spirit of 1776 is rekindling.” In short, he saw it as proof that the days of Hamiltonianism were numbered.

Jefferson left the cabinet and retired from public life in 1794. Hamilton followed a year later. Convinced that the “philosopher of Monticello” remained obsessed with becoming president, Hamilton never expected the retirement to last. Still, during Jefferson’s three years away, Hamilton said ...