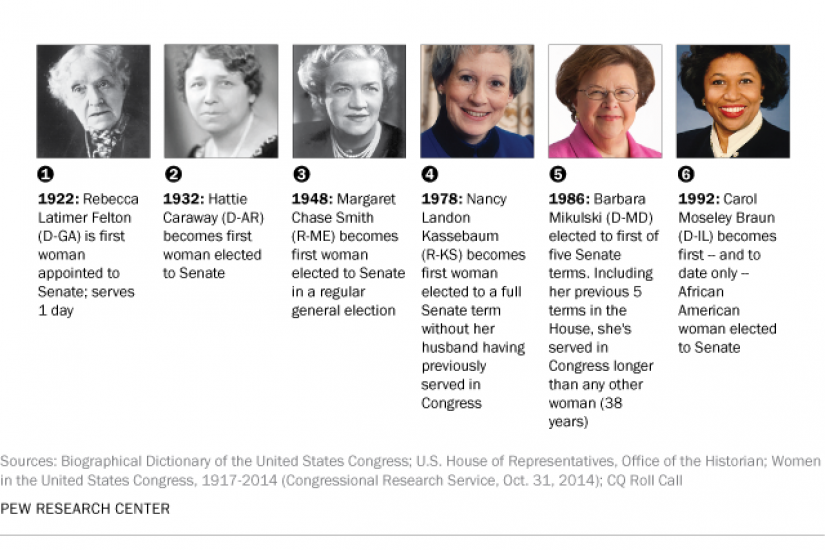 The new Congress that convened this month includes a record 108 women — 88 in the House (including four nonvoting delegates) and 20 in the Senate. While women still account for only about a fifth of each chamber, that’s a considerable increase from where things stood not too long ago.

A new Pew Research Center report looks at American women in leadership roles, both in business and politics. Women have served in Congress almost continuously for nearly a century. Although in the early decades a common route for women to Capitol Hill was succeeding their deceased husbands, nowadays nearly all women in Congress were elected on their own. Recently, their ranks have surged: Of the 278 women who’ve served in the House, more than half have been elected since 1992, and 23 of the 46 women who’ve ever served in the Senate took office in 1996 or later.

The first woman to serve in Congress, Republican Jeannette Rankin, was elected in 1916 to represent Montana, which had enfranchised women two years earlier. The 19th Amendment, which extended the right to vote across the nation, was ratified in 1920; that November, Alice Mary Robinson of Oklahoma became the first woman to defeat an incumbent congressman. (She, in turn, lost the seat back to him two years later.) In 1922, veteran suffragist Rebecca Latimer Felton of Georgia was appointed to fill a vacant Senate seat; when Congress was unexpectedly called back into session, Felton was sworn in as the first-ever female senator (though she only served for one day).