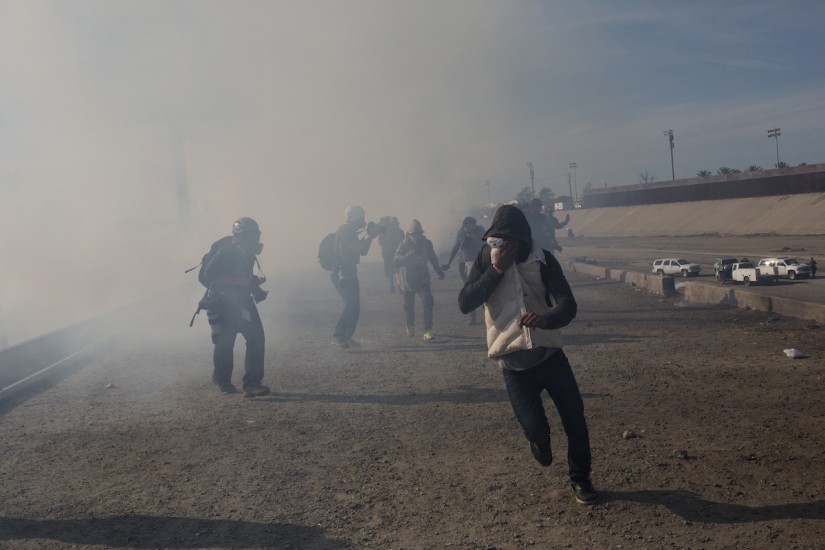 Migrants run from tear gas launched by U.S. agents after a group of migrants got past Mexican police at the Chaparral crossing in Tijuana, Mexico, Sunday, Nov. 25, 2018.
AP Photo/Rodrigo Abd

The first test call using America’s 911 emergency system was placed on February 16, 1968. To fanfare in the press, a state legislator sitting in the City Hall of the small Alabama town of Haleyville dialed in to the local police station. His call was answered by a group of august notables—a US representative, a telephone-company executive, and president of the Alabama Public Service Commission Theophilus Eugene Connor. Better remembered today by his nickname, “Bull” Connor was an outspoken white supremacist who believed desegregation was a communist plot; just five years earlier, as commissioner of public safety in Birmingham, he had notoriously unleashed riot police, fire hoses, and attack dogs on nonviolent civil rights protesters.

That such a man should have been on the receiving end of America’s first 911 call is fitting. As Stuart Schrader reveals in his new book, Badges Without Borders: How Global Counterinsurgency Transformed American Policing, the United States’ 911 system was modeled on an earlier program pioneered by American-funded police forces fighting a Marxist insurgency in Caracas. The Venezuelan emergency-number program, used by local authorities to connect civilian informants and coordinate crackdowns, was such a success that President Johnson’s National Advisory Commission on Civil Disorders recommended its adoption stateside. The new emergency-call network was a signal achievement of the Johnson administration’s War on Crime, which overhauled America’s police infrastructure and laid the groundwork for modern mass infrastructure and the carceral state. By fostering “consumer-like expectations of police responsiveness,” Schrader observes the 911 system proved transformative. “Agents of state power authorized to enact violence would not be a last resort. The first line of defense became the first responders.”

Helping security forces crush dissidents in Venezuela was not America’s only “experiment” in foreign police assistance in the 1960s and ’70s, and today’s 911 system is not the only “product” developed abroad and then imported back to the US during this time. In his distressing and erudite history, Schrader documents how many of the tools and tactics adopted by American police over the past half century were originally deployed to fight communism abroad. His argument, which Badges Without Borders persuasively demonstrates, is that the era of intensified American policing that began in the 1960s cannot be understood outside the context of the Cold War national-security state.

After World War II, the United States found itself in a delicate position: ostensibly committed to a global agenda of liberty and human rights, but also materially and ideologically vulnerable to leftist and communist insurgencies in the decolonizing nations of Southeast Asia, Latin America, and ...