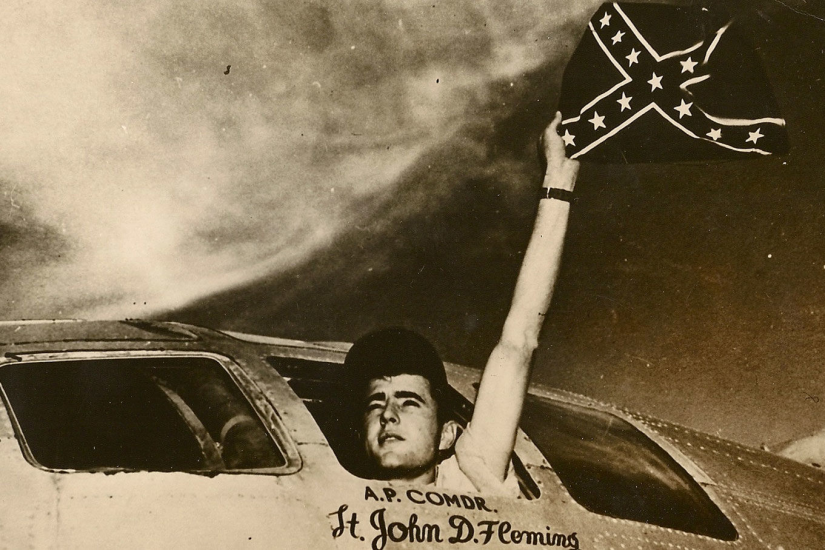 B-29 pilot Capt. John D. Fleming prepares to take off for a bombardment of the Japanese city Wakayama in WWII.
flickr.com/pirateheart
…

Over the last few weeks, there has been near unanimous agreement among liberal and mainstream commentators that the Confederate flag represents “hate, not heritage.” The flag’s current presence in American culture is ubiquitous. It adorns license plates, bumper stickers, mugs, bodies (via tattoos), and even baby diapers. The flag’s popularity is normally traced back to the post–World War II reaction of the Dixiecrat South to the civil-rights movement. South Carolina, for instance, raised the Stars and Bars over its state house in 1961 as part, columnist Eugene Robinson said on Meet the Press, of its “massive resistance to racial desegregation.”

All true. But like many discussions of American conservativism, this account misses the role endless war played in sustaining domestic racism. Starting around 1898, well before it became an icon of redneck backlash, the Confederate Battle Flag served for half a century as an important pennant in the expanding American empire and a symbol of national unification, not polarization.

It was a reconciled Army that moved out into the world after the Civil War, an unstoppable combination of Northern law (bureaucratic command and control, industrial might, and technology) and Southern spirit (an “exaltation of military ideals and virtues,” including valor, duty, and honor). Both law and spirit had their dark sides leading to horrors committed because of either the very nature of the American empire—the genocide of Native Americans, for example, or the war in Southeast Asia—or the particular passions of some of its soldiers. And both law and spirit had their own flags.