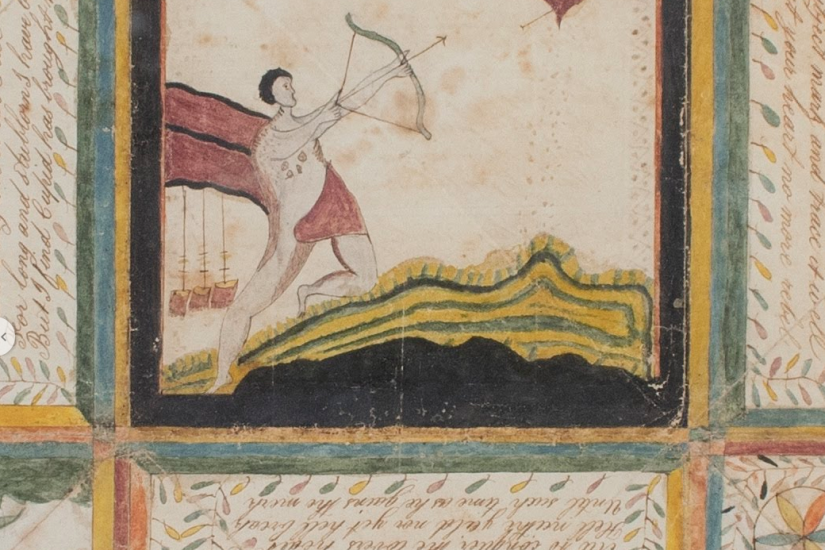 ... letter could be prepaid using a new device—the postage stamp. The low cost and efficient delivery of mail, along with the adoption of envelopes that allowed privacy, helped encourage the sending of valentines in England and likewise in the United States, which implemented similar postal policies.

... letter could be prepaid using a new device—the postage stamp. The low cost and efficient delivery of mail, along with the adoption of envelopes that allowed privacy, helped encourage the sending of valentines in England and likewise in the United States, which implemented similar postal policies.

Heartfelt sentiment has sometimes inspired the creation of handmade valentine cards or original written romantic messages, whether in prose or poetry. Recipients have often treated those valentines as treasured keepsakes and a select few have survived to enter museum collections.

In 1667, famous English diarist Samuel Pepys described a handmade valentine card to his wife from “Little Will Mercer” who “brought her name writ upon blue paper in gold letters, done by himself, very pretty—and we were both well pleased with it.” Unromantically, Pepys then lamented, “But I am also my wife’s Valentine and it will cost me 5₤.”

Handmade valentines could be incredibly elaborate, as seen in this greeting made about 1835. Its ornate calligraphy and colorful embellishment typifies the folk art style known as fraktur (for the “fractured” or angular gothic font) favored by Pennsylvania Germans at the time. However, most people did not have either the initiative or the skill to create valentine cards, thereby creating a market opportunity that printers increasingly addressed.

In the early 19th century, writing paper moved away from being exclusively plain as stationers offered styles with ornamental edges and decorative printed designs. A suitably romantic message could then be inscribed, expressing the writer’s ardent affection.

When Valentine’s Day came around, many people found themselves with serious writer’s block, incapable of expressing the emotions in their hearts. The solution? A genre of books known as Valentine Writers offered rhymes to suit a wide variety of circumstances. Pursuing your plumber? Attracted to a shop-girl? These books supplied everything tongue-tied romantics needed to express their desires.

Filling in the Blanks

Many valentines came with blank interiors, another reason that suitors turned to Valentine Writer books for prefab poetry. Card senders could also turn to printed messages that they could paste into their chosen card.

Manufacturing Feeling For many years, sharing a Valentine’s Day greeting required making it yourself. Only as advances in printing and distribution accelerated in the 19th century did manufactured cards become commonly available. Since then, manufacturers have produced valentines to suit a broad ...