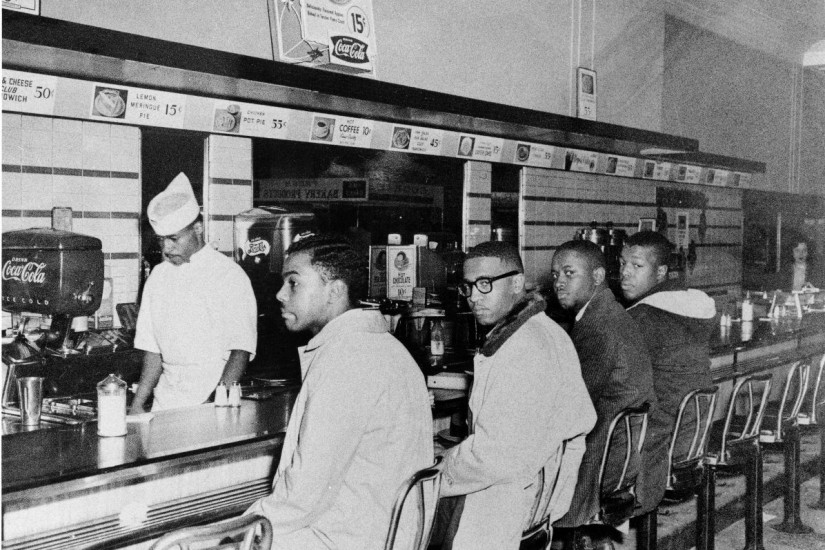 Four college students on the second day of their sit-in at F.W. Woolworth Co. in Greensboro, NC., Feb. 2, 1960. Charles Bess is pictured behind the counter.
Jack Moebes/News & Record

... also served cakes and pies if needed. It wasn’t a glamorous job, but Bess took pride in it. “If you were going to be a busboy at Woolworth at that time, you had to be fast,” Bess says. “Oh yeah, I was fast. I think that’s why Mrs. Holt kept me there, cause she saw that I could keep up.”

... also served cakes and pies if needed. It wasn’t a glamorous job, but Bess took pride in it. “If you were going to be a busboy at Woolworth at that time, you had to be fast,” Bess says. “Oh yeah, I was fast. I think that’s why Mrs. Holt kept me there, cause she saw that I could keep up.”

Bess was working as a busboy on the day that Joseph McNeil, Franklin McCain, Ezell Blair Jr., and David Richmond walked into the store. He says that before making their way to the counter, the young men bought some school supplies. Bess says he had seen other black people try to sit at the counter before the A&T Four, but none had attempted to stay after being asked to leave. After doing just that, the men kept calmly asking the waitresses for a cup of coffee each time one of them passed by.

“I remember it was kind of a cold day,” Bess says. “I guess that’s why they wanted the coffee.”

He remembers how one of them asked why he couldn’t be served if his money was just as good as anyone else’s. After being ignored by the waitresses, they stayed for about an hour until closing time.

“Here’s the thing,” Bess says. “They didn’t move. Nobody could understand that. They were just teenagers. It really took the younger guys to get it to boost off because at the time, the older people were afraid to do that. The older folks were set in their own ways. These four guys, they were not hungry for just food, they were hungry for a change.”

He was so surprised by their actions that he stopped working for a while and just watched the four students as they protested.

“I really wanted to see what was going to happen,” Bess says. “I was looking at ’em. I didn’t say nothing to them.”

And while the now-famous photograph shows Bess as reserved and a bit distant, Bess says, he was ecstatic on the inside.

“I was excited about it,” Bess says. “I was really excited to see it happen. I felt like whites and blacks and any other race should be able to sit down and eat together.”

After his shift was over, the four had gone, and he had finished his closing duties, Bess caught a cab home and remembers telling the driver all about the young men who came into the store that day. As soon as he got home, he told his sister, and then his brother-in-law.

“I felt like I wanted to tell everybody,” he says as he waves his arms up and down. “I was excited about it. It was a very exciting week.”

Bess says that working for a company that kept whites and black separated — not only behind the scenes, but publicly — felt complicated at times.

“I did have to wrestle with it,” he says. “I was on the other side, being paid by a company that was keeping me going, but all the same time, I was kind of on their side. I was on this side, but I was rejoiced by the people on the other side. I felt like there needed to be a change.” Bess ...