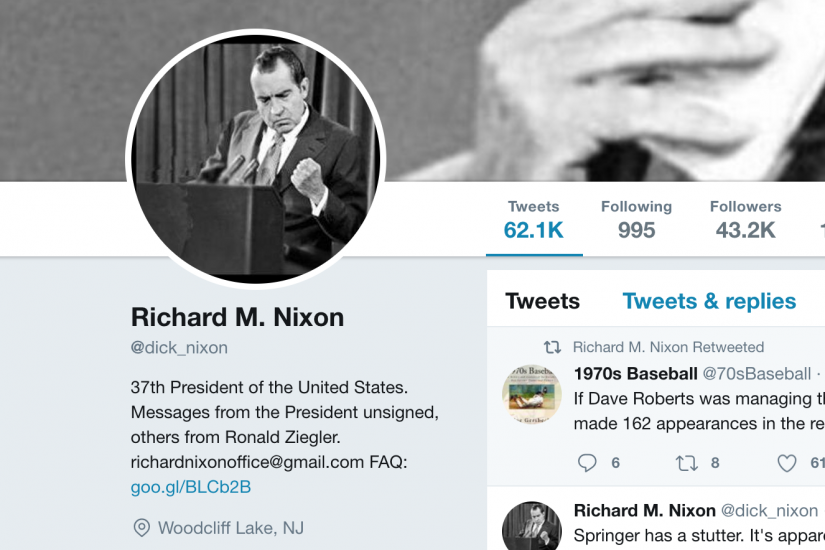 As President Donald Trump continues to mouth off about the Russia investigation on Twitter—he recently admitted that he’s the target of an obstruction of justice probe—some have cracked wise on Twitter about what President Richard Nixon’s Twitter account might have looked like during Watergate, had social media existed in the 1970s. “The Jews,” surely—they’d show up a lot. Not to mention Teddy and that poor drowned girl, and those goddamn hippie bums.

Really, though? Nixon liked a drink, and he’d call people in the middle of the night for company and reassurance. I even believe Henry Kissinger’s account of him talking to paintings of his predecessors. But Nixon was once the Navy’s best poker player, and my sense is that he’d sooner die than show his cards like Trump does nearly every day.

Based on my years running the @dick_nixon Twitter account, I’ve imagined how Nixon might have tweeted during the scandal that brought him down. Some of the “tweets” below are imagined, but others adapt things Nixon actually said about Watergate, in public and in private.

You’ll see a president who is often angry and vindictive, full of absurd jealousies and justifications. But he’s also capable of introspection, and is never overmatched. Nixon’s temper flares worst at the time of the Pentagon Papers—but in his darkest days he’s cool, sometimes self-pitying, the boxer determined not to fall before the bell.

Of course, in the end, he did.