... produced tremendous changes in the nation. 5 It relocated hundreds of thousands of settlers, transformed the village of Yerba Buena into the city of San Francisco, polluted western waters, destroyed the soil, and led to the dispossession and genocide of more than ten thousand Native Californians.

... produced tremendous changes in the nation. 5 It relocated hundreds of thousands of settlers, transformed the village of Yerba Buena into the city of San Francisco, polluted western waters, destroyed the soil, and led to the dispossession and genocide of more than ten thousand Native Californians.

The Gold Rush also introduced new figures into the American imagination. The Chinese worker with his wide palm-fiber field hat, the frontiersman with his sugar loaf or panama, the Mexican with his sombrero, and (most out of place of all) the effete urban Easterner struck with gold fever who’s gone west on a wing and a prayer. This Easterner was not solely a figure of the imagination, either. While no small number of forty-niners were desperate or destitute, many others were thoroughly middle-class city-dwellers who, as Brian Roberts writes, “joined the rush for a variety of reasons: for gold, to be sure, but also to escape… the stultifying walls of moral codes and lawyers’ offices”.6 These men did not conform to their contemporaries’ idea of who belonged in California any better than they conform to the popular image of the Wild West today. The Independent Gold Hunter on His Way to California, printed by Currier & Ives, is emblematic of the satirical view many Easterners took of their “Argonaut” brethren. Laden with pots and pans, a string of sausages and a shovel, the would-be prospector is shown in his town clothes, striding along, still 1700 miles from his destination — the very picture of foolhardiness. 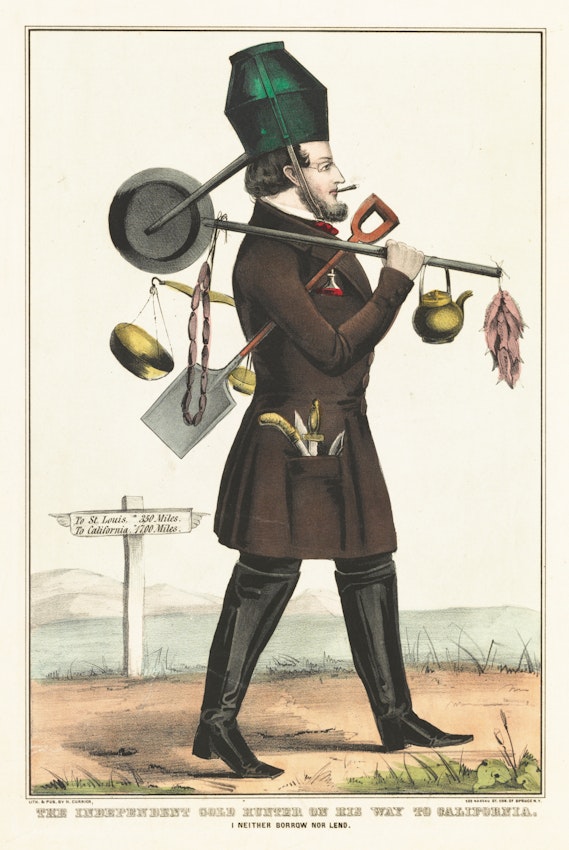 The Independent Gold Hunter on His Way to California: I neither Borrow nor Lend (ca. 1849), published by N. Currier — Source.

Narratives quickly attached themselves to this laughable figure, emphasizing both the real and the imagined dangers that could be encountered on a journey to the West. For those going overland, these included immense unmapped distances, hostile Native Americans (whose territory was being violated), starvation, dehydration, and disease. For those going by way of Panama, there were the added possibilities of being shipwrecked, eaten by an alligator, or stranded in a foreign land. For those going around Cape Horn, there were all the usual perils of a long ocean journey conducted entirely by wind and sail. Over all these narratives hung the question why? Why leave home and hearth? Why forsake civilization? Why risk life and limb for an improbable promise of wealth?

Questions like these were implicit not only in the lithographs and cartoons of these years, but also in a form recently introduced to North America: the comic book.7 In The Adventures of Mr. Tom Plump (ca. 1850), Journey to the Gold Diggins (1849), and Outline History of an Expedition to California (1849), the figure of the Eastern Argonaut was set into motion and put to the test.

The Adventures of Mr. Tom Plump, a children’s book, is by far the least sophisticated of the bunch. Its drawings are stiff, its captions brief, and its story is demented. An unlikely-looking schoolboy called Mr. Tom Plump, who is — you guessed it — plump, runs away from his Eastern home and sets sail for California. Once there, Mr. Plump “gets poor” (meaning he loses weight) and finds some gold, which disappears when his mule is frightened by a bear. On arriving back home, he in turn frightens his parents, who don’t recognize him now that he’s thin. Soon enough, however, “good living makes him fat again” and, having married a woman who can dance the polka, Mr. Tom Plump drowns in a river after falling through a bridge. This is a shaggy dog story if ever there was one. Besides getting seasick and losing his gold, Mr. Tom Plump’s adventures don’t have much to do with the adventures experienced by actual forty-niners.

Journey to the Gold Diggins, illustrated and probably written by J. A. and D. F. Read, is a masterpiece by comparison. Its seascapes and grotesque human figures look forward to the elaborate comics art of Tony Millionaire, and its story — about a skeletal “urban dandy” called Jeremiah ...