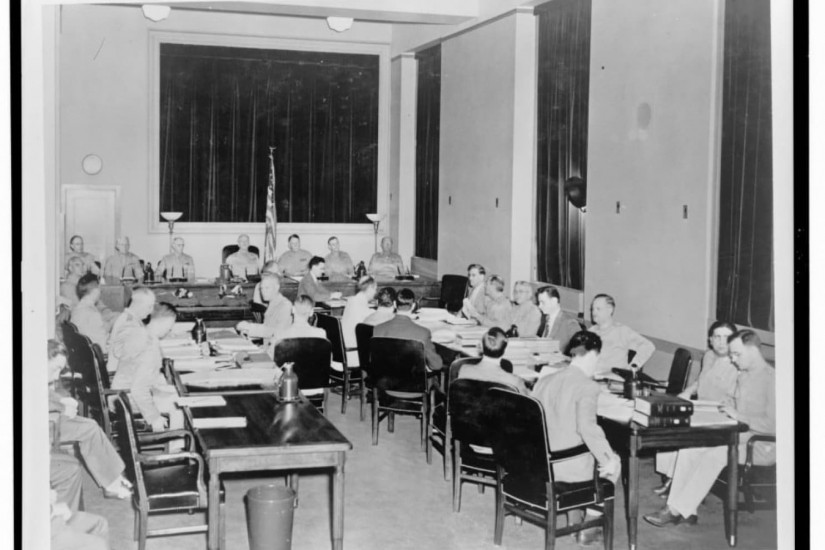 The special seven-man military commission opens the third day of its proceedings in the 1942 trial of eight Nazi saboteurs in the fifth floor courtroom of the Department of Justice building.
Library of Congress
…

A team of power company workers was trudging through a seldom-visited thicket in Southwest Washington when they spotted something odd in a ditch.

Protruding from the grass was a rectangular slab of granite.

They looked closer, and an inscription on the surface came into focus. What they saw astonished them.

It was a memorial. In honor of Nazi spies. On U.S. government property.

“In memory of agents of the German Abwehr,” the engraving began, “executed August 8, 1942.”

Below that were six names, and below those was another cryptic line: “Donated by the N.S.W.P.P.”

News of the unsettling discovery soon reached Jim Rosenstock, who worked in resource management for the National Park Service and also happened to be a local history buff. He was curious, but also skeptical. How could someone have planted such an item there? And why? And — above all — who?

Rosenstock needed to see it for himself, so he, too, made the hike into Blue Plains, a woody area known best for a wastewater treatment plant and an abundance of mosquitoes. And that’s when he saw the stone.

“I kind of started doing a little bit of my own research,” Rosenstock recalled of that day in 2006 when he began to help unravel an only-in-Washington mystery, complete with World War II espionage, nationwide panic, a mass electrocution, J. Edgar Hoover chicanery, white supremacists, classic federal bureaucracy and a U.S. Supreme Court case that played a significant role in America’s modern war on terror.